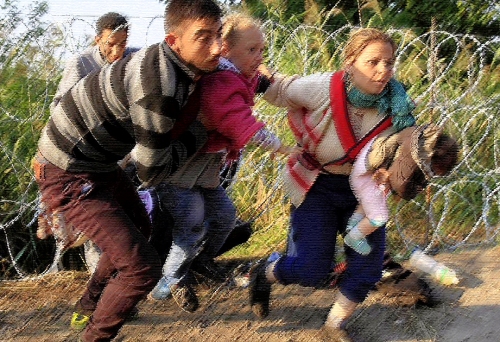 Thousands are continuing to cross borders into Europe on a daily basis. Germany expects 800,000 migrants to reach its borders by year’s end. Each number represents a hope,  dream and vision for a better life, one safe from physical and emotional violence.  Even the United States is considering raising its annual ceiling of 70,000, the total number of refugees it accepts on an annual basis, to 85,000 in 2016 and 100,000 in 2017.  But that is a drop in the bucket compared with the vast numbers of men, women and children fleeing to Europe from Syria, Iraq, Libya, Sudan, Eritrea, Nigeria, Afghanistan, Pakistan and elsewhere for a better life.

This is being hailed as a “humanitarian crisis of epic proportions.” What does it represent? What are the issues involved? Can it be effectively resolved? We have seen mass migrations before; what makes this one different?

First, this migration is occurring in the 21st century. It means more communication is taking place among the migrants by cellphones. As families and groups of migrants move, they are in constant contact with those who have gone before them, learning where to go, what to avoid and what to expect on the road ahead of them. Digital technology also gives them access to GPS, web maps and news.

Second, the reasons why people are migrating are diverse. Previous migrations were often defined by major or cataclysmic events such as war, devastating natural disasters or religious/cultural upheavals. This resulted in mass migrations defined by singular issues.

We think of Sudan, Somalia, Cambodia, Eastern Europe, Bangladesh, Biafra (in Nigeria), and Russia, with thousands of refugees facing either religious or racial genocide, massive homelessness due to catastrophic disaster or displacement due to war, and the redrawing of national boundaries.

But the cause of this current migration is not so readily defined. Thousands of migrants seek economic relief. Others are more readily classified as refugees who fear persecution due to religious, racial or cultural differences. Others are escaping the ravages of life in a war-torn country.  There simply does not appear to be a singular reason for this mass movement of peoples.

Third, while previous migrations involved citizens of a specific country or region, this one is different. More than half of all global refugees come from Syria, Afghanistan and Somalia, with Syrians being the largest group.  This means larger groups of immigrants moving at the same time. It also seems to have resulted in a lack of migrant inhibition to defy authorities. A sense of “community,” if you will, is being forged among many migrants, giving them courage to stand up to police and  hastily erected fences in their effort to get to their goal.

This diversity has also negatively impacted the major refugee camps created to temporarily house the thousands of migrants and refugees. Tensions are already high within them. The lack of basic necessities adds to the tension. On top of that, we have tribal factions, diverse ethnic and religious groupings, and a multiplicity of nationalities and reasons for migrating. That is a sure recipe for conflict within the camps.

The last major distinction that needs to be included is the global context. Since the World Trade Center attacks on September 11, 2001, the challenge of global terrorism has become a focus for us all.  This has created an elevated feeling of fear. Fear stemming from isolated acts of terror has become an everyday part of life for those regions of the world that had been largely untouched by such violence. The availability of bombs and weapons, and lack of inhibition to use such destructive means to even the smallest separatist group have added to this fear. No nation, city or individual feels immune to such violence anymore. In addition, the wide diversity of the migrants has generated fear of the “other.” The level of fear generated by this mass migration has created a degree of mistrust not seen in previous migrations.

What are the issues facing the global community because of this mass migration? An important issue we have to face immediately is how can we, as a community of nations, effectively address the well-being, health and welfare of these thousands of men, women and children?

This is, of course, the basis of the 17 Sustainable Development Goals of the United Nations.  How do we balance the needs of individual nations with those of the worldwide human family? How do we tackle the extreme poverty around the globe? How do we end hunger and achieve food security for all? Can Europe’s healthcare systems handle such large influxes of people? As the migrants settle throughout Europe, will there be enough jobs to enable the migrants to support themselves adequately? What can we do about making basic education available to all people? How do we foster sustainability and provide a safe living environment throughout the world? What is our responsibility as men and women of a loving Creator/Parent who must surely be experiencing tremendous pain at the moment?

Another issue is the reality of global terrorism. As Scripture notes, we need to be as innocent as doves yet as wise as serpents. Should we assume each and every one of the migrants have peaceful intentions, that embedded within the thousands there are no terrorists who desire to perpetrate violent harm on innocent men and women? How do we balance being doves and serpents in this case? On the other hand, will the presence of barbed wire fenced borders foster resentment and anger that will help create a budding terrorist where none existed before? How do we as men and women of faith respond to this issue? 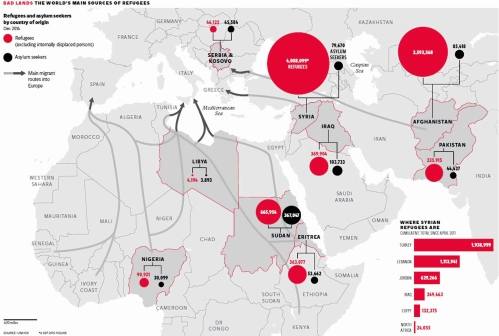 Finally, a major issue is the resulting change in the geopolitical landscape because of the mass migration. With four million Syrians having fled their homes, this leaves a much sharper distinction between those too poor to escape the Syrian civil war and the regime in power which can rule unchecked. Religious extremists like ISIS may have a much smoother road to dominate regions of the Middle East with the loss of those who potentially could have stood up to them. The same holds true for Afghanistan and Pakistan and other countries teetering on the edge between religious fanaticism and moderation. The mass migration will change the geopolitical and religious landscape of Europe as well.

Where do we go from here? Of course, we are moved by the images of large number of parents giving their children to strangers on buses and trains just so they can possibly have a new and better life somewhere in Europe. We are also moved by the generosity of countries like Sweden, Slovenia, Austria and Germany who have taken and will continue to take in thousands of migrants. The newly-developed distribution centers in Austria may be an effective way to address the large short-term needs of the migrants thus far.

Though the Unification movement, and Reverend Moon in particular, have been victims of the Schengen Treaty, we must admit a policy of a zone of border-free, passport-free travel is closer to what we espouse in Unificationism. Men and women of one family under God should be able to travel freely and have the opportunity to know, understand and love each other. Borders divide and separate us. It is the presence of borders that engender the desire to be free of and go beyond them to a concept of the ideal – however we define it.

Unification thought sheds further light on the crisis as we consider the repercussions of the newly-approved EU plan to distribute 120,000 refugees across its 28 states over the next two years. Its implementation could add to growing disharmony in Europe and division between right- and left-wing elements. Were a head-wing solution proposed, disharmony would be minimized and a viable solution could be introduced that bridges divides.

The religious educator, Gabriel Moran, speaks of the four “inters”: intergenerational, interreligious, international, and intercultural. For Moran, as well as for the Unification movement, only when we are able to live in the intersection of life in this way and allow the interplay of these dimensions to occur can we begin to experience living as one family under God.  It is in that intersection where we can seriously discuss and address such issues as human well-being, poverty, sustainability of humanity and the created world, violence, and fear of the other.  Perhaps the EU needs to include those voices who understand this interplay as they address the current humanitarian crisis.♦

Dr. Kathy Winings is Vice President for Academic Affairs; Director, Doctor of Ministry Program; and, Professor of Religious Education and Ministry at UTS. She is also Vice President of the Board of Directors for the International Relief Friendship Foundation. She received her Ed.D. from Teachers College, Columbia University, and her M.Div. from UTS (Class of 1987).