Divine Principle (DP) teaches all human beings are created to live forever in an invisible spirit world with God. In this article, I review Unification teaching on eternal life and suggest ways to improve it. This is important because the DP view of spiritual realities and how we can know about them is based on metaphysical assumptions no longer tenable in the modern/postmodern world. I make the case DP teaching on eternal life needs to be updated and offer points to consider to start this process.

Unification teaching demands no empirical evidence to verify its truth claims about eternal life. DP assumes when we die the same individual personality from earthly life continues in the spirit world:

Based on the assumption human beings go to spirit world after bodily death and maintain the same personality embodied while living on earth, DP teaches the doctrine of returning resurrection. It explains how human beings living as spirit selves in spirit world “come down to earth” to exert influence over earthly people. During the 1980s and 1990s, two dramatic expressions of returning resurrection occurred in the Unification faith community, seeming to prove the existence of spirit world and spirit being interaction with earthly people (cf. 40 Years in America: An Intimate History of the Unification Movement, pp. 397-401; pp. 550-58).

Throughout his speaking ministry, Rev. Moon testified to the reality of a spiritual world, and often spoke to members on how to get cooperation from good spirits and avoid evil spirits.  In 1998, a two-volume set of books, Earthly Life and Spirit World, was published containing excerpts on spirit world gleaned from hundreds of Rev. Moon’s talks. Perhaps Rev. Moon’s most poignant testimony concerning spirit world is his spiritual encounter with Jesus as a teenager, while praying all night on a Korean mountainside (As a Peace-Loving Global Citizen, pp. 49-50).

DP teaching about eternal life is based on the  assumption there must exist an objective and independent world apart from all perception of it. Until the time of the Enlightenment, this view of the universe (“Great Chain of Being”) proved to be a superb way to interpret reality, while trying to account for God, the soul, heaven, the physical world, and mystical experience. From 1400-1800, this explanation of reality took a severe beating from which it never fully recovered.

Divine Principle points out European Renaissance and Enlightenment thought thoroughly undermined the premodern view of reality; especially in regard to religious dogma about heaven, hell and the afterlife:

“By the turn of the eighteenth century, the Cain-type view of life had broken down the verities enshrined by history and tradition. All matters in human life came to be judged by reason and empirical observation.  Anything deemed irrational or other-worldly, including belief in the God of the Bible, was thoroughly discredited (DP, p. 355).”

It can be argued either way as to the merits of the European scientific revolution, but what can’t be argued is individuals would no longer accept the traditional views of God and the afterlife  without some type of empirical verification and/or rational explanation.

The latter half of the 20th century introduced additional problems for traditional categories of metaphysics. American philosopher Ken Wilber speaks of a “great war” that took place in academia between the sciences and the humanities, involving the Subjectivists and Intersubjectivists:

“The Subjectivists included all those approaches to the humanities [including science] that indeed relied on introspection, subjectivity, consciousness, awareness, and interiority…. The second camp was the Intersubjectivists. Whatever their differences, they were united in an understanding that by the time consciousness delivers an object to awareness, said consciousness has been molded, shaped, created, and constructed by a vast network of impersonal systems and structures, foremost among which are linguistic systems, cultural backgrounds, and structures of consciousness.  None of these can be seen by consciousness itself; none of these can be seen by subjectivity; and thus subjectivity is exactly what has to be called into question — and in the final analysis, deconstructed… Thus, it is not by subjective introspection, but by understanding these intersubjective structures, that we come to know ourselves (Integral Spirituality, p. 278).”

In Wilber’s view, the Intersubjectivists currently rule the humanities, and as a result “spiritual studies are more or less dead in Western academic culture.”

Modern science is critical of truth claims failing to demonstrate some type of empirical verification or rational explanation.  Taken to the extreme, this view leads to the denial that any level of reality exists beyond what the five physical senses can verify (scientism). Naturally, trying to “prove” the existence of an invisible God or spirit world through the scientific method only is problematic. Since the Enlightenment, traditional religion struggles mightily under the weight of scientism, while trying to validate the existence of “that which cannot be seen with physical eyes.”

In the premodern worldview, levels and locations of trans-physical realities exist as objective things, just waiting to be discovered. It makes no difference what “the one perceiving” is thinking or believing about a given thing, because anyone who comes in contact with these preexisting realities “above” and “beyond” the physical world (supernatural) will see the same thing.  Yet, discoveries made in the modern and postmodern era clearly indicate before any object comes across our awareness — i.e., ultimate truth, God, spirit world, heaven, hell, Jesus — numerous impersonal systems operate in the background shaping how our consciousness perceives and interprets these objects. 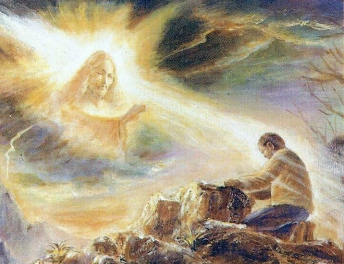 A depiction of Rev. Moon’s encounter as a teenager with Jesus.

In the case of DP, its claim to discovery of “the new, ultimate truth of God” via Sun Myung Moon’s introspection, prayer, and communication “with many saints and Jesus in Paradise,” does not hold up under modernity’s demand for objective evidence and postmodernity’s demand for intersubjective grounding. Asserting DP is the new truth because of tradition, or claiming it is true “because God personally told me so,” doesn’t help either.

Where do we go from here?

In general, human beings intuit higher dimensions to life other than what can be seen in the manifest world.  We sense in our hearts the existence of realities “transcendent of time and space.” When science is honest, it admits it is not equipped to answer questions of ultimate concern, such as: Why does the universe exist?  What is the meaning of my life? What happens after death?  What is love?  Why is there evil in the world? The great wisdom traditions are uniquely suited to grapple with and address these questions. At the same time, these traditions are laden with premodern assumptions about the nature of the universe.

Divine Principle contains elements of the great myths embedded in the wisdom traditions, like: Moses parts the Red Sea with his staff; God defends the defenseless; God cares for and protects His “chosen” people; God rewards the faithful with eternal life in Heaven; God rescues the human race from Hell by sending to earth His only begotten son; etc. Behind these great myths, profound wisdom and instruction unfolded down through the centuries to guide and encourage human beings how to live a life of goodness centering on love. At the same time, these myths need to be updated and reinterpreted, to make better sense (and be more credible) in our post-modern world.

DP teaching on eternal life needs to be updated. Here are some points to consider in moving forward with this process:

For decades, the Unification “truth paradigm” concerning eternal life rested on outdated assumptions about the nature of spiritual realities and how we acquire knowledge of those realities. It is not that our teaching on immortality is wrong or flawed.  It is about opening up to how Spirit is now trying to speak to us and “move us up” to the next level of consciousness to more fully embrace this incredible universe of diversity, wonder and possibility.

Divine Principle contains a rich narrative about life that is full of promise and hopeful expectations. However, it is incumbent on us to squarely face the outdated assumptions behind our view of spiritual realities and make any necessary adjustments.♦

Jack LaValley spent 20 years as part of a personal protection team for Rev. and Mrs. Moon and their family. He is the founder of true4ever and author of the book, Seven Secrets to Finding True Love. He received his M.S. Ed from the University of Bridgeport. Jack and his wife, Wha ja, are the proud parents of three grown children.