The Heart of a Dreamer: Father’s Vision for UTS 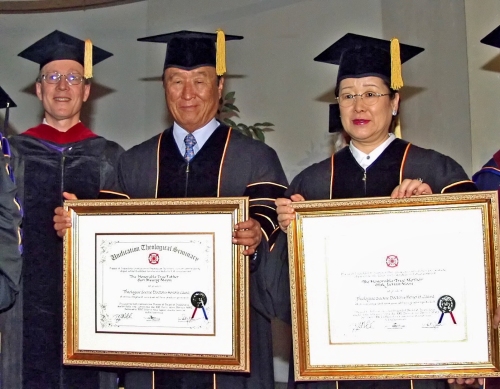 I believe that True Father did not establish Unification Theological Seminary primarily for the sake of educating Unificationist ministers. Of course, Father’s mind is 360 degrees and ministry preparation was part of the picture, but he already had fine ministry preparation with the workshop system. The main purpose for UTS, as far as I am aware, was that of teaching our leaders about what the other religions believe, so that we could, 1) have intelligent and respectful dialog; 2), help them succeed in their ministry by introducing True Parents’ spirit and truth; and 3), build coalition with them that would eventually create the foundation for what Father later came to call the spiritual “upper house” of the United Nations.

I won’t rehearse the history of that plan and the role of UTS in it, but simply say that even in failing to reach the heights of Father’s vision, UTS accomplished an incredible feat, and that the vision is still worthy and true and capable of achievement, and that its achievement—at least until the people God has prepared to partner in it (e.g., the UN) do so — would cost our movement a huge amount of money.

In the latter years of my UTS presidency, I outlined to the UTS Board of Trustees this interfaith path, including the broad stroke path that UTS was designed to take. The Board liked the path, and said to follow it. Unfortunately, they didn’t pay enough attention to the price tag (which I actually low-balled).

I also informed the Board that if they did not want to undertake that expense, there is an alternative path, and that is to learn from the grassroots Christian start-up churches and how they are educating their pastors. I’m talking about the Vineyard movement, the Calvary Chapel faith movement, Saddleback, Willow Creek, and something that emerged since then, Nelson Searcy’s Renegade Pastors; and there are many others. These churches are educating hundreds of thousands of pastors around the world, in-house and online, at very low cost. I advised the Board that going online would require care in terms of preserving the accreditation, but that the industry is changing.

And wouldn’t you know it, today, the flagship grandmother institution of American theological education, the Association of Theological Schools, has on its website the following announcement:

“A lot has changed in thirteen years. Until 2000, ATS accrediting standards did not permit any kind of distance education. Recently, the Board of Commissioners of the ATS Commission on Accrediting, by granting exceptions to the residency requirement, made fully online degree programs possible at six member schools, three of them offering the MDiv.”

I advocated that, given the financial resources the church was ready to give UTS, we choose this alternative path—the grassroots, low-cost path to educate church leadership, and put the interfaith project on the back burner.

I am now four years older and wiser. I have realized that what I presented as either-or—interfaith, big-ticket education, or denominational, inexpensive education—is not an either-or. In other words, Father was right. We can do both. And the key comes from my reflection on words that Father said to me when he received his honorary doctorate from UTS.

It was the commencement address Father gave—extemporaneously—in June 2001. It was the year that UTS presented to our True Parents their honorary doctorates. (It was the first Unificationist school to do so, by the way) True Father turned to me, from the pulpit, and said that UTS has to educate students in two things: world religions and the change of blood lineage.

My mind boggled (as was often the case when Father spoke to me). World religions—the most broad, all-encompassing, open-ended topic—and change of blood lineage—the most internal, complicated, providential sacrament of the Second Advent? How do we fit those together? “Oh yes, professor, here is our Department of World Religions, and we have one other department, the Department of Change of Blood Lineage.” Sorry, my cartoon self took over and I put Father’s words on the shelf. Mea culpa.

It took me 14 years to grasp the truth in Father’s words. Here’s how I see it: The core ministry of the Second Advent, the path to world peace and the unification of heaven and earth, is the Holy Marriage Blessing, the change of blood lineage. All the world’s religions—not just Christianity—have the primary purpose from God’s viewpoint of preparing their populations to receive the Holy Marriage Blessing. What we need to do is educate the leaders of the world’s religions to understand and receive the Holy Marriage Blessing, and to put it by themselves into their own contexts to minister it—authentically, fully, robustly, thoroughly—to their billions of believers. Game over. 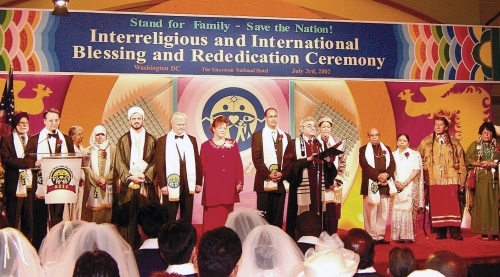 ACLC’s Interreligious and International Blessing and Rededication Ceremony in Washington, DC in July 2002.

So, the mission of UTS is to create leaders who are 1) complete in ministering, teaching, explaining, and practicing the Holy Marriage Blessing, and are, 2) thoroughly well-versed in the beliefs, scriptures, rituals and traditions of all the world’s religions. These leaders should be able to answer the fundamental questions, reach the fundamental hearts of the religious leaders, and support them as they figure out how to bring their peoples to the True Parents of heaven, earth and all humankind.

So, UTS’s mission is to teach world religions and the change of blood lineage. The medium can be online—the world is too big, time is too short—with reasonable provision for workshops and seminars everywhere. It is accreditation-worthy. It is inexpensive. It is contemporary—it’s a doggone smartphone app. I’m sure some smart second gen will come up with one. I have a radio ministry called Holy Marriage Blessing, and a young lady (not a Unification Church member) working on the graphics for its website asked, in all sincerity, “You mean you can get married on the radio?” It is the avenue to Father’s dream of cross-cultural marriage blessing.

Now, about the Barrytown property—it’s a white elephant. In 2008-09, with our UTS Board and Holy Spirit Association staff partnership, we mapped out several paths for the property, including fairly intensive discussions and investigations with Bard College personnel, up to its President’s visit. Of course, the amount of work that can be done is endless, but on the basis of what we did, which was not inconsiderable, it is clear to me that there is no good option — by which I mean there is no sure-fire guarantee of fiscal and spiritual success, and that the least bad option that shows the most promise, by far, is to have an undergraduate college here. And with a good leadership team in place and sincere cooperation between the church and school, a college can turn a sow’s ear into a silk purse.

Reverend Moon prepares a fishing net with students at Unification Theological Seminary in the late 1970s.

And it’s not just for the sake of salvaging a property—although that is a miracle worth achieving. It’s not even just for our young Unificationists who would find spiritual and academic hope here—although that also is a miracle worth living for. It’s because True Parents’ dream of true higher education, into which our movement invested untold resources in Korea — and (until 2003) in Bridgeport, Connecticut — has yet to be realized. And college campus culture in the West, to use the phrase Greg Baer loves so much, is going down the toilet. True Father’s vision for true marriage and true families cannot be achieved without victory on the frontline, and the frontline is the college campuses of the West.

Yes, we need to change the existing universities. But to do so, what is needed above everything is a model of health. I know I’m way too radical, but I’d like to call it “Marriage College” (maybe “Holy Marriage College,” then people might think it’s Catholic 🙂 ).  In any case, we need a spiritual revolution, and if we can’t do it, how can we expect other universities to do it?

I suggest, in my mystical rapturous mindset, that this is what Father’s footprints at Barrytown lead us to, if we’re willing to follow them.♦

Dr. Tyler Hendricks (UTS Class of 1978) served as president of the Unification Church of America and of Unification Theological Seminary. He is presently directing the online Center for Education at UTS, and conducts the weekly Holy Marriage Blessing radio ministry, which can be heard live on the web Sundays at 7 am New York time.

12 thoughts on “The Heart of a Dreamer: Father’s Vision for UTS”