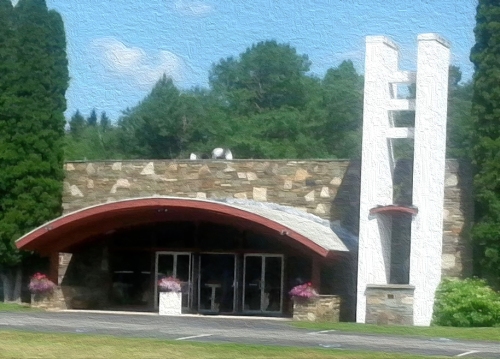 The Sanctuary Church (SC), with branches in the U.S. and overseas, is best understood as a schismatic movement. Followers of schismatic movements are known as schismatics. A schismatic is a person who creates or incites schism in an organization or who is a member of a splinter group.

SC, formally the “World Peace and Unification Sanctuary,” claims that the wider Unification movement has deviated from the teachings and practice of the Reverend Sun Myung Moon and that its purpose is to preserve and propagate his teaching.

The SC schism was several years in the making.

In 2013, SC Pastor Hyung Jin Moon, then International President of the Family Federation for World Peace and Unification (FFWPU, a.k.a. the Unification Church), refused the request of his mother, Hak Ja Han Moon, to take up duties under her in Korea. Instead, he relocated to the “wilderness” of Newfoundland, Pennsylvania, where he began an independent ministry. He was supported by his elder brother, Kook Jin Moon, who relocated Kahr Arms, which he heads, to nearby Pike County. Together, they purchased a church facility in 2014 and began the SC ministry.

His epiphany was that the “predatory system of control… in the world at large” also was occurring in FFWPU. Based on this understanding, he directed Unification Church members to resign from FFWPU organizations. In a subsequent “Declaration of Heaven,” he announced the removal of all current leaders of the Unification Movement, declaring they had “no authority.” He called on members to take over church boards and elect replacements.

This radicalized his position. Previously, he called for the “liberation” of his mother from “archangels” surrounding her. Afterwards, he attacked her directly. He declared her “authority and power” to be “stripped away and removed.” He announced her displacement as “True Mother” and conducted a ceremony transferring that position to his wife. He declared his mother was “seduced” by archangels, and in an unfortunate phrase, referred to her as the “Whore of Babylon.”

Along with these pronouncements, Hyung Jin Moon declared all “Holy Blessings” conducted since Rev. Moon’s passing to be invalid and began conducting “restorational” blessings. He declared “ancestor liberation” ceremonies under the auspices of FFWPU were corrupt and announced he would liberate member’s ancestors to the 210th generation. He denounced the governing structure of FFWPU’s “Cheon Il Guk Constitution,” and substituted “The Constitution of the United States of Cheon Il Guk” which identified him, and his male heirs, as temporal monarchs.

The Sanctuary Church has been disruptive due to its ongoing attacks and efforts to poach members from the wider movement. It gained a fervent following, established branch churches, and aggressively marketed itself on social media. The remainder of this article offers a cursory sketch of SC beliefs and future prospects.

SC shares many beliefs and texts with FFWPU. This section outlines core beliefs that depart from or have been defined in opposition to FFWPU.

God. In opposition to Mother Moon’s admonition that members pray to their “Heavenly Parent,” implying that Unificationists image God as mother as well as father, SC affirms a wholly patriarchal deity. God, they insist, is in the masculine “subject” position.

True Parents. According to Hyung Jin Moon, True Parents “are equal in love and in value… but in authority that is a different matter. There is an order. There is a hierarchy in True Parents.” As he expressed it, “In TPs, there is an absolute subject and king.” That is Rev. Moon. Mrs. Moon is in a feminine “object” position not only to her husband but also to his male seed.

Bridegroom theology. Hyung Jin Moon teaches that it would have been best if Father Moon, as Messiah and King of Kings, had taken “all the women of this world and be their spouse and to have children from every single one.” This, he said, was the “quickest way” to kill off Satan’s lineage.

Scripture. SC denies that Father Moon’s teachings, specifically his “last words” to humankind in the form of “Eight Great Textbooks,” can be edited or altered in any way. SC applies its doctrine of textual literalism primarily to the 2,500-page Cheong Seong Gyeong, or “Heavenly Scripture,” which includes excerpts of Father Moon’s sermons arranged thematically.

Succession. SC takes the position that Hyung Jin Moon has “inherited the full authority of the True Parents on earth.” As such, he has the right to proclaim himself the “second King” of Cheon Il Guk (the Unification equivalent of the Kingdom of God on earth), announce that his wife was now fulfilling the role of True Mother, and conduct a ceremony in which his wife bowed before one of his sons designated as the “third King,” thereby solidifying the ongoing subordination of mother to son.

Eschatology. Hyung Jin Moon views the current situation as a “time of warning” and “time of desecration.” In his view, “postmodern, humanistic, secular feminist ideology” dominates the world and FFWPU. SC upholds catastrophic biblical predictions as prophetic warnings to America and is quick to cite “signs of the end” such as a MERS outbreak in South Korea which temporarily shut down a FFWPU workshop site. SC is suspicious of multinational corporations, central bankers, politicians, and elites in general. It embraces a vision of the ideal that attempts to link dynastic monarchism with libertarian values. 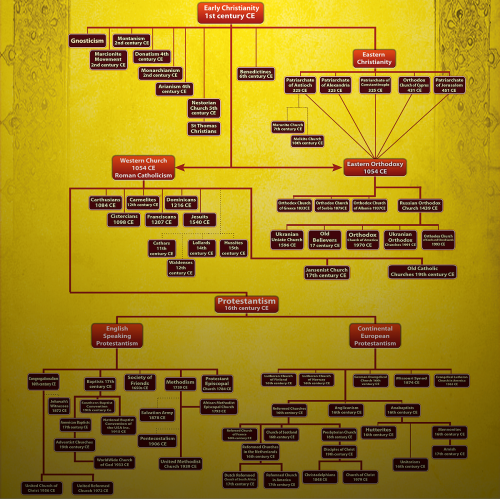 A chart (click to enlarge) of Christian denominations since the first century CE, emphasizing pre-1054 schisms (adapted from a chart published by an Islamic organization).

SC’s future is indeterminate, especially at this stage. Its conflict with FFWPU is asymmetrical. SC possesses only a small fraction of FFWPU’s membership and resources. It has promoted itself on social media to look outsized. However, vocalness should not be confused with size or influence. So far, SC has limited itself to poaching members from the wider movement. As such, it tends to resemble any number of splinter groups, particularly those that have broken off from large U.S. sects, such as the Latter Day Saints or Seventh Day Adventists. SC, as a movement, has little meaningful contact with the “outside” world, seeing itself in a cosmic struggle against “predatory elites” and pretenders who have captured the wider society and their church.

At the same time, it would be a mistake for FFWPU to minimize or dismiss SC out of hand. Hyung Jin Moon was FFWPU International President. More than that, he was “crowned” on several occasions by Father and Mother Moon. He and his wife were designated as their “inheritors” and “representatives.” Kook Jin Moon headed Tongil Group, FFWPU’s corporate conglomerate in Korea and controlled the distribution of monies to the wider movement. In addition, SC has won several FFWPU leaders including a former national leader of Japan, the former president of Unification Theological Seminary and a former chair couple of the U.S. Blessed Family Department. To this point, SC’s demonization of FFWPU and adoption of countermeasures show no sign of abating.

The particulars of the SC/FFWPU conflict are unique but the “schismatic dynamic” it embodies is not without precedent in the history of religion. The following are five trajectories this dynamic can take or has taken:

Dr. Michael Mickler is Professor of Church History as well as Vice President for Administration at Unification Theological Seminary. His books include: Footprints of True Parents’ Providence: The United States of America (2013) and 40 Years in America: An Intimate History of the Unification Movement, 1959-1999 (2000).

72 thoughts on “The Sanctuary Church Schismatics”