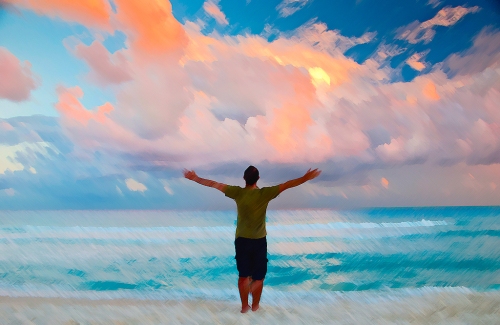 The idea of absolute obedience, enshrined in the Family Pledge alongside absolute love and absolute faith, is problematic.

How can we be “absolutely obedient” to something or someone without violating another cherished teaching of Father Moon, namely “conscience before teacher, conscience before parent, conscience before God?” Moreover, if we practice complete obedience to any external authority, don’t we risk compromising our integrity in case that authority proves to be less than absolutely just?

“There are three types of obedience. One is just to obey whatever is told you. The next type is to obey while always seeking to know God, Truth and the why of things. The third type is obedience after knowing the heart of the Father.” (Leaders’ Address, 5-1-65, The Way of Tradition, Vol. II, p. 137)

“To obey whatever one is told” is a necessary stage of development. If a child does not obey unquestioningly the warning voice of her parent, she puts herself at risk.

If, for example, she keeps walking across the street when her mother shouts “Stop!”, she could be killed. It is not important for her to know the reason why she must stop. She simply needs to obey, or she could die. This is formation stage obedience — children’s obedience.

The second type of obedience is the one which questions, but still obeys. It struggles to know “God, Truth and the why of things.” Teenagers are the best example of this stage. They are often not content to simply obey, or should they be, for they need to “own” the truth behind parental commands in order to become true parents themselves.

In terms of the Divine Principle, an example would be Adam or Eve asking: “Why should I not eat the fruit of the Tree of Knowledge? Will I ever be able to eat this fruit? Why did God put this fruit tree in the middle of the garden if I am not to eat it?” Ideally, however, the adolescent still obeys the commandment not to eat, and eventually comes to understand the reason for it. This is growth stage obedience. This stage of questioning — like the stage of “just obeying whatever one is told” — is necessary in the development of mature obedience, but it is still not “absolute” obedience.

The final stage of obedience is the type that follows God’s will without even being asked, because the person knows God’s heart. This is completion stage obedience — mature obedience. It is the type of obedience that willingly sacrifices oneself for others without being commanded to do so. It is the obedience that anticipates God, or even goes beyond God’s expectations. An example is a mother who risks her life to save her child, or a patriot who goes beyond the call of duty in battle.

Is it the formation stage, the growth stage, or the completion stage that most closely conforms to “absolute” obedience? Certainly it is neither children’s obedience nor adolescent obedience, but mature obedience. Moreover, mature obedience, as described here, is not actually “obedience” as normally understood. It acts without being told, and thus transcends the normal sense of obeying an external command. At times it may even contradict an order from an external authority if that authority does not conform to a person’s conscience.

The attitude I’ve suggested regarding “absolute obedience” can also be applied to the question of absolute faith: children’s faith accepts what is taught without question; adolescent faith has questions, but accepts church doctrine; and mature faith (absolute faith) does not need to question, because its owner knows God’s heart and follows his/her conscience.

Examples of “absolute obedience” that contradicts external authority include cases where a teacher tests his student by ordering him to do the opposite of what he should actually do. In the Bible this is exemplified by Elijah instructing his protégé Elisha to stay behind while Elijah went to the opposite side of the Jordan. Elisha disobeyed, and was rewarded by seeing Elijah ascend into heaven and inheriting a “double portion” of his spirit (2 Kings 2). In Reverend Moon’s teaching, this principle is exemplified in the following quote:

“…the day and the moment will come when even God seems to be saying ‘I don’t know you.’ At that time you will feel that you are utterly alone in all the universe.

If under those conditions you still do not give up, but insist, ‘No matter what God thinks or what True Parents say to me, no matter how unsympathetic the church members are, this is the right way and I will go on anyway.’ Then at that moment you are elevating yourself to the highest level of faith. Once you reach that level you can be trusted unconditionally by God and by me, and eventually the whole world.” (The Desire of All Things, 6-17-77)

A practical example confronts us today in the form of our response to the publication of the Cheon Il Guk Constitution (CIG-C).

In recent weeks, several writers on this site have expressed objections to the CIG-C. I myself have expressed serious disagreement with the document’s provision that “some or all” Cheon Il Guk citizenship rights shall be forfeited for such actions as renouncing God or True Parents, or renouncing the constitution and its ideology.

As a longtime professional working in the religious freedom field, it is clear to me that this provision — while permissible for churches who need to uphold certain membership standards — is not permissible for nations which seek to uphold human rights. Thus, in the name of “absolute obedience,” I choose to follow the lead of my conscience over the authority of the CIG-C. As Father Moon himself taught in his testimony before the U.S. Senate in 1984, “if you do not have religious freedom, you have no freedom at all.”

When I recite Family Pledge number eight, I do so with a clear conscience.

When I affirm a commitment to “absolute obedience,” I am not pledging to obey external commands. Instead, I am pledging to achieve a state of “absolute obedience” — already knowing God’s heart — in order “to achieve the ideal of God and human beings united in love… and to perfect the realm of liberation and complete freedom in the Kingdom of God on earth and in heaven, by centering on true love.”

To me, this means I am striving to unite with God’s heart, so that I don’t need to be instructed, but can realize God’s Will as a “true owner” of Cheon Il Guk.

Dan Fefferman (UTS Class of 1986) is President of the International Coalition for Religious Freedom in Washington, DC, and a member of the UTS Board of Trustees. He is also the author of many of the Unification Movement’s best-loved songs. More than 100 of his compositions can be found on SoundCloud.com.

Photo within text: “Sunrise by the Seashore on Assateague Island, Maryland.” Hosted by Premier HDR.

20 thoughts on “What Is Absolute Obedience and How Do We Practice It?”