This year marks the 50th anniversary of Pope Paul VI’s 1968 encyclical, Humanae Vitae (“Of Human Life”), which condemned the use of artificial birth control methods. The arrival of the birth control pill in 1960 triggered Pope Paul’s letter, and it sought to stem the tide of the 1960s sexual revolution.

The encyclical was singularly unsuccessful.

A chorus of dissent, even within the Roman Catholic community, followed its publication.  A recent account recalls that, within days of its release, a group of American Catholic theologians issued a statement saying, “[S]pouses may responsibly decide according to their conscience that artificial contraception in some circumstances is permissible.”

A year later, a survey found that 44% of Catholic women of childbearing age were using artificial contraception and by 1974, 83% of U.S. Catholics reportedly said they disagreed with the ban. Commentators blamed the encyclical for a decline in people attending mass and for damaging the authority of the papacy, particularly among younger Catholics.

The encyclical also failed to stem the tide of the 1960s sexual revolution.

According to one author,

“[T]he year the Pill went on the market, most Americans lived in nuclear families, the average married couple had four children, and mothers stayed home. By 2000, the average family had two children, one out of two marriages ended in divorce, and almost a third of American children were being raised by a single parent or an unmarried couple.”

Acceptance of premarital sex, cohabitation, alternative forms of sexuality and abortion accompanied the trend. In the 2000s, Internet connections facilitated easy access to pornography and dating sites. Smartphone apps such as Tinder encouraged casual sex. However, “hook-up culture” prompted consternation and the #MeToo movement suggested that the sexual revolution had not ended predation but may have licensed it.

Mary Eberstadt, writing in First Things, notes, “The encyclical warned of four resulting trends: a general lowering of moral standards throughout society; a rise in infidelity; a lessening of respect for women by men; and the coercive use of reproductive technologies by governments” [i.e., China’s one-child policy]. She claims, “[E]ach of these predictions has been borne out by the social facts.”

Humanae Vitae describes the “transmission of human life” as “a most serious role in which married people collaborate freely and responsibly with God the Creator.” Based on this core affirmation, the encyclical elaborates three “doctrinal principles” or theologies.

These doctrinal principles or theologies led inexorably to the encyclical’s condemnation of “any action which either before, at the moment of, or after sexual intercourse is specifically intended to prevent procreation.” On the other hand, the encyclical affirms the Church teaching that “married people may take advantage of the natural cycles immanent in the reproductive system and engage in marital intercourse … during those times that are infertile, thus controlling birth in a way that does not in the least offend … moral principles.”

That is the essential teaching of Humanae Vitae. The text anticipates “not everyone will easily accept this particular teaching” but states it is the destiny of the Church, “no less than her divine Founder,” to be a “sign of contradiction.” The encyclical asserts that the Church must not “evade the duty imposed on her of proclaiming humbly but firmly the entire moral law” and cannot “declare lawful what is in fact unlawful.” It states, “In preserving the whole moral law of marriage, the Church is convinced that she is contributing to the creation of a truly human civilization.” 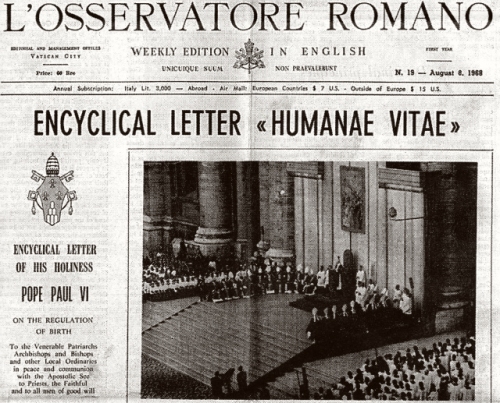 The main sources of Unification teaching on birth control are,

These convey a mostly consistent teaching though not without differences in tone and recommendations.

Rev. Moon’s theology of marriage and teaching on birth control has a great deal of resonance with that of Humanae Vitae. Marriage, or the “Blessing,” as in Catholicism, is a sacrament (i.e., ordained by God). It also is the vehicle through which husband and wife perfect themselves and generate new lives. In addition, similar to Humanae Vitae, Rev. Moon references natural law, stating, “[O]ur original nature wants to spread and expand our offspring centered on family, which is the origin of moral principles of humanity.” He likewise echoes Humanae Vitae in rejecting birth control as frustrating God’s purposes.

The following is a selection of references from his speeches:

Like Humanae Vitae, Rev. Moon accepted “natural” birth control but only under extraordinary circumstances. In a 1967 speech to married couples translated by Dr. Masuda, he asked them “to study how to do birth control” based on ovulation cycles and bodily temperature. He offered this advice in the context of “total mobilization” for “restoration purposes,” something Dr. Masuda indicates, no longer applies.

The “Unification Church View on Contraception” section in The Tradition text affirms Rev. Moon’s position but softens it. It states, Rev. Moon “does not stress a negative attitude by considering the use of birth control a sin.” It also emphasizes, “[T]he Unification Church considers marital relations apart from the purpose of procreation as holy.” While noting that artificial forms of birth control “are not favored,” it broadens the use of natural methods beyond “total mobilization” to “special circumstances such as health problems.”

Dr. Masuda, in True Love, Sex, and Health, also affirms Rev. Moon’s teaching but broadens it further in accepting the limited use of birth control pills. He cites a variety of good effects and “their use by tens of millions of women for more than 30 years.” Although pronouncing himself “somewhat hesitant to recommend any type of birth control to those … who can deliver healthy babies,” he indicates he is “somewhat open to the use of contraceptives by young newlywed couples.” For them, he advocates choosing contraceptive methods “as natural, safe, and reliable as possible” and views contraceptive pills to be preferable over condoms or diaphragms “which create an artificial barrier between a man and women’s genitals.”

He expresses openness to “morning-after” pills and even “RU486” abortion pills in the case of rape. However, he rejects spermicides as dangerous, “interrupted sex” as unreliable, and surgical interventions, whether a vasectomy for men or tubal ligation for women, as mostly irreversible should unforeseen circumstances lead couples to desire pregnancy and childbirth again. Dr. Masuda devotes a number of pages to the “Basal Body Temperature” or “symptothermal method” as a preferable means of natural birth control.

Where Does this Leave Today’s Unificationists?

Unificationism is in a position akin to Roman Catholicism. Most Unificationists regard Rev. Moon’s guidance to be authoritative, even revelatory, and he firmly rejected birth control, allowing only the rhythm method under extraordinary circumstances.

However, many Unificationists practice birth control. According to Crescentia DeGoede, Director of the FFWPU Blessing and Family Ministry (BFM):

“The topic of birth control always comes up in the … Education Workshops for … couples preparing for the Blessing. Because of what we understand from True Parents’ teachings, we guide couples to embark on having children at the time when they feel they have a strong enough foundation in their love for one another as a husband and wife to invest in loving and raising children, i.e., work on strengthening their conjugal realm of heart before entering into the parental realm of heart. Based on this, we inform couples about a variety of birth control options, including the natural method, and then encourage couples to discuss what they would like to do, and make the best choice for their couple.” (Email communication, July 12, 2018. Reprinted with permission)

Informing couples of “a variety of birth control options” further broadens Rev. Moon’s teaching. Referring to those unprepared to have children, Rev. Moon stated, “[I]f your body is defiled and you believe that you should not give birth to children the way you are, you should not do so.” However, whether he advocated abstinence or birth control methods is unclear.

In general, adherence to Rev. Moon’s strictures on birth control appears to be a minority position within contemporary Unificationism. One young Unificationist who argued “practical circumstances shouldn’t decide when and how families should grow” and who didn’t “want to plan my family so carefully that I plan God right out of it,” noted that when she became pregnant at 19, “I actually received persecution from other members.”

Grappling with these issues is the task of moral theology, a discipline that identifies principles of human behavior in light of divine revelation. However, moral judgments frequently require balancing competing goods.

In terms of birth control, Unificationism balances Roman Catholic and Protestant positions. Roman Catholicism essentially emphasizes obedience to divine and natural law. Protestantism, as its position on contraception has evolved over the past century, upholds the primacy of conscience. Both of these orientations have resonance within Unificationism.

The Latter Day Saints (Mormon) Church similarly mediates between Roman Catholic and Protestant traditions, having strong doctrines of the family and human co-creatorship. Their policy on birth control states:

“The decision as to how many children to have and when to have them is extremely intimate and private and should be left between the couple and the Lord. Church members should not judge one another in this matter.”

Unificationism does not have a policy on birth control. Given controversy in the United States over Supreme Court nominees’ views on reproductive rights, ever-expanding global population, continuing advances in genetic science and technology, and increased participation of women in public life, it may be incumbent upon Unificationism to craft such a policy as it develops its reflections on moral and pastoral theology.♦

Dr. Michael Mickler is Professor of Church History as well as Vice President of Unification Theological Seminary, and Director of the SunHak Institute of History, USA. His books include: Footprints of True Parents’ Providence: The United States of America (2013) and 40 Years in America: An Intimate History of the Unification Movement, 1959-1999 (2000).

14 thoughts on “Where Does Unificationism Stand on Birth Control?”