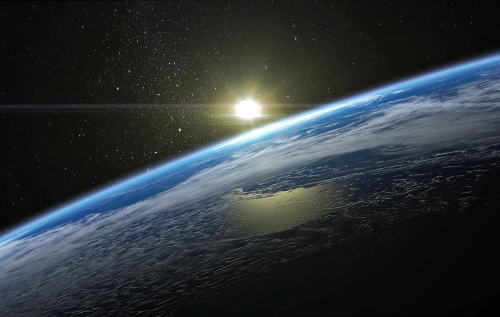 In “A Layman’s Cosmology: Speculation on the Origin of Existence and God,” I speculated “It would appear that Existence might be likened to a vast, endless sea of particles and atoms, with the potential, as Aristotle saw it, to be made into an infinite variety of substances. All that was wanting was a being with the mind to create.” I noted a Creator with a consciousness to love and bring about harmony in creation — modeled after His/Her own being — emerged from this sea of existence.

This article explores the possibilities of how God worked through the evolution of the earth to prepare for the arrival of humankind.

Scientists tell us the universe is 13.8 billion years old, while the earth is 4.5 billion years old. In our reckoning, that is a long period: plenty of time for the Creator to experiment, test, prepare, and develop step-by-step an ideal physical environment and introduce humankind to that world.

According to geological evidence, earth scientists have divided the history of the planet into major eras, periods and epochs in order to track the evolution of earth’s chemical, geological, biological, and climate events. It took four billion years for earth to form out of a volcanic, molten mass, and for life to be introduced.

First, in the Precambrian Era, major developments took place to make the earth capable of supporting life: earth’s molten mass had to cool off and form a solid crust; the chemical composition of the atmosphere had to develop, water introduced, and oceans formed. During the first billion years, a magnetic field formed around the earth, which kept the planet’s atmosphere from dissipating into the vast solar system. Without our atmosphere, life on earth would not exist, as is the case with the Moon and other planets in our solar system.

The evolution of plants, fish and animals started in the sea, where they remained for at least 600 million years. In the absence of a protective ozone layer, the land was bathed in lethal levels of UV radiation. Once photosynthesis raised atmospheric oxygen levels high enough, the ozone layer formed, making it possible for living things to venture onto the land.

The Paleozoic Era or “Age of Fishes” came next, lasting 325 million years, with the introduction of amphibians and insects.

END_OF_DOCUMENT_TOKEN_TO_BE_REPLACED

There were 1.8 billion Muslims in the world as of 2015 — 24% of the global population — according to a Pew Research Center estimate. Islam is currently the world’s second-largest religion (after Christianity), but it is the fastest-growing major religion.

This may scare some people, but as Unificationists we should take this fact very seriously. True Mother proclaims that she will fulfill her mission before she goes to the spiritual world. That mission is to give the Blessing to all the people of the world. Islam comprises a quarter of the world’s population and is growing every day. Therefore, it is essential we find a way to reach the Muslim world as the filial children of our True Parents, Rev. and Mrs. Sun Myung Moon.

My husband and I have been working in the Middle East since 1996 and have found that most Muslims are very tolerant and open-minded. They have a deep love for God and believe that religion should play an important role in people’s lives. They follow God’s words and tradition and are deeply conservative.

Because of this, they have little respect for the Western world which has lost its religious values and is becoming more secular every day. They become deeply disturbed when they see how Western values are influencing their young people. Because of the lack of values of the West, some Muslims see the West as the enemy who is promoting a sinful lifestyle and should be stopped.

But the reality is that the Muslim world is more open to Unificationist values and principles than the Western world. They have a great deal in common with the world of Unificationists. They are desperate to preserve the family and family values. They honor purity and marriage. They understand the value of a relationship with God and religious tradition as a cornerstone for the community and society.

Sharing our values and principles with the Muslim world is not difficult on a personal level but because of the political and religious control we have to be sensitive and adjust our approach to meet the current situation of Islamic nations.

Concerning the task of approaching Muslims with the Divine Principe, it is important to understand the Muslim world, the religion and the culture, before we start to share our ideology. This is important especially if we are not from a Muslim background.