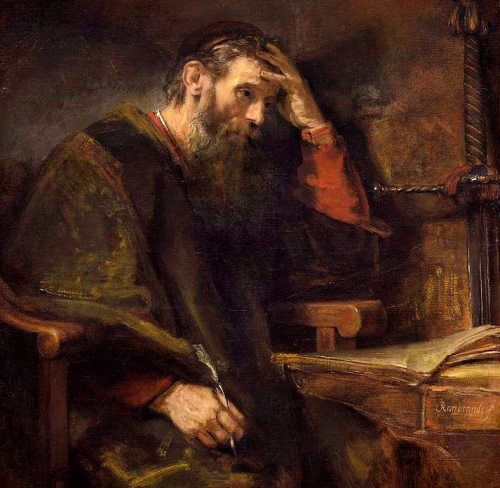 Many times I heard it said that in the early days of the Christian church, it was of one accord, sharing all things in common, united by the Holy Spirit. Certainly this is the view of the church we get from the Book of Acts, which emphasizes the theme of unity through the Holy Spirit:

And they, continuing daily with one accord in the temple, and breaking bread from house to house, did eat their meat with gladness and singleness of heart, Praising God, and having favour with all the people.  (Acts 2:46-47; KJV)

But from Paul’s letters we get a different viewpoint, in which factions and sometimes angry discord can be seen.

In Paul’s letter to the Galatians he speaks of a public argument between himself and Peter over the question of whether Jewish Christians were allowed to eat at the same table with Gentile Christians. And in the letter to the Corinthians, he speaks of factions centered on different leaders.

Now I appeal to you, brothers and sisters, by the name of our Lord Jesus Christ, that all of you be in agreement and that there be no divisions among you, but that you be united in the same mind and the same purpose. For it has been reported to me by Chloe’s people that there are quarrels among you. (I Cor. 1:10-11)

Peter, of course, is traditionally known as the chief disciple of Jesus, the one whom Jesus appointed to be the head of the church. But as already mentioned, Peter and Paul fought about whether Jews and Gentiles could eat together.

Was this also a question at Corinth? Paul was the first apostle to preach at Corinth and is thought to be the founder of the Corinthian church. Perhaps those who claimed Peter as their leader believed that that Gentiles shouldn’t mix with Jews, or even that Gentiles should convert to Judaism to become full members of the church. Or, to put a kinder face on it, perhaps it was just that some members of the Corinthian church were converted by Peter’s preaching and were boasting of this, because having Peter as their spiritual father made them feel superior to others.

But what of those who said, “I belong to Apollos?” Not much is known of this evangelist, but the Book of Acts refers to him as active in the city of Ephesus. He was “a Jew, a native of Alexandria. He was an eloquent man, well-versed in the scriptures.  He had been instructed in the Way of the Lord; and he spoke with burning enthusiasm and taught accurately the things concerning Jesus, though he knew only the baptism of John” (Acts 18).  Paul said, “I planted, Apollos watered, but God gave the growth.” This refers to the fact that Paul was the first evangelist to come to Corinth, but Apollos came soon after and apparently was quite successful in bringing in new members to the Corinthian church.  But were there theological differences between Paul and Apollos, as there apparently were between Paul and Peter? The Book of Acts hints that Paul’s ministry emphasized the Holy Spirit more than Apollos’ did. It states, “When Paul came to Ephesus, he found some disciples and said to them, “Did you receive the Holy Spirit when you became believers?” They replied, “No, we have not even heard that there is a Holy Spirit.” Thus it is likely that the Holy Spirit was a more important factor in Paul’s tradition than in the tradition of Apollos.

This gives us a possible insight into another thing that was dividing the Corinthian church – the controversy over speaking in tongues and the gifts of the spirit.  According to Paul’s letter, those who spoke in tongues sometimes used this gift arrogantly, disrupting church meetings and making a bad impression on new guests.  It got to the point that Paul said, “I would rather speak five intelligible words to instruct others than ten thousand words in a tongue… if the whole church comes together and everyone speaks in tongues, and inquirers or unbelievers come in, will they not say that you are out of your mind?” (I Cor. 14)

This is the problem that prompted Paul’s most memorable chapter, the famous one on love (I Cor. 13), in which he says, “If I speak with the tongues of men and angels, and have not love, I am a noisy gong or a clanging cymbal.” He goes on to explain that speaking in tongues ranks relatively low among the gifts of the Spirit, and encourages the Corinthians to “seek first the higher gifts,” such as prophecy. He closed that chapter with the blessing, “Now hope, faith and love abide; but the greatest of these is love.”

As time went on, another issue that divided the church was the question of which scriptures were legitimate and which were not.  II Timothy 3:16 says, “All scripture is inspired by God and is useful for teaching, for reproof, for correction, and for training in righteousness.”  But what scripture is the author of this letter talking about? There was no New Testament as we know it at that time. In Paul’s day, the gospels had not yet been written, and even the Old Testament was not yet formed into a definite canon as we have today.

In fact, there was considerable debate about the question of scripture. In the mid-second century a teacher named Marcion arose in Rome and became influential both in the Roman church and Asia Minor. He was the first to propose a definite list of authorized scriptures. His bible consisted of an edited version of the Gospel of Luke and six letters of Paul. Not only did he omit the other Gospels and letters of the New Testament, he rejected the Old Testament completely. Marcion went so far as to say that the vengeful God of the Old Testament was a different being entirely from the Heavenly Father who inspired Jesus Christ.  This prompted the orthodox Church to decide once and for all that the Old Testament God and the Heavenly Father were the same being, and that the Old Testament was indeed holy scripture.

Authors whose writings survived soon began discussing which scriptures they considered valid. The Muratorian Canon is a list from the late first century that is more inclusive than Marcion’s in which we can see the New Testament that we know beginning to take shape. It includes Four Gospels, The Book of Acts and 13 Epistles of Paul.  Hebrews is notably not included. The Epistles of Jude and John are included, but the Epistles of Peter and James are not. The Book of Revelation is also included.  Interestingly, Muratorian canon accepts three books that were later rejected: the Apocalypse of Peter, the Wisdom of Solomon, and the Shepherd of Hermas (accepted to be read in church but not considered apostolic).

However, it would not be until the fourth century that the New Testament took final form. Many people have wrongly believed this happened at the Council of Nicaea, but this is not the case. The first complete list was published in 376 C.E. by Bishop Athanasius of Alexandria. Even after this, however, some churches accepted books that are now omitted – for example the Epistle of Barnabas, the Gospel of Peter and the Shepherd of Hermas, while others rejected books that are now included – such as the Book of Revelation and Epistle of James.  In fact, it would not be until the Council of Trent in 1546 that the Catholic Church formally adopted the current list, and even today Catholic Bibles include the Old Testament Apocrypha, which most Protestant Bibles omit.

From this we can see that it took a very long time for the question of Scripture to be settled.

A fragment of an early Greek New Testament manuscript.

So what does this have to do with Unificationists? One advantage we have over the early Christian Church is that Reverend Sun Myung Moon himself left us a list of authorized texts, the “Eight Great Textbooks”:

In addition, Rev. Moon said that his autobiography, As a Peace-Loving Global Citizen, has equal standing with the Eight Great Textbooks. Of course, Unificationists are not prohibited from reading other scriptures in church as well.

Nevertheless, today we have a major controversy brewing over which version of a collection of Rev. Moon’s words is legitimate: the first edition of the Cheon Seong Gyeong (2006), or the revised edition published last year.  Some argue that Rev Moon said, “Don’t touch the CSG,” while others point to speeches in which he authorized additional volumes and expressed his intention to reduce the original version to a more manageable length:

The first and second sorting process have been conducted. It consists of around 2,300 pages. Look at the huge amount of pages. I will work on reducing it myself, complete it before I die and mark it with a seal (Collected Sermons, Vol. 434 -128, Jan. 30, 2004)

So the question becomes, was Mrs. Moon authorized to complete this work that Rev. Moon intended to complete before he died? He said things like, “If I ascend to the spirit world, True Mother can take over my role” and “the True Parents have achieved ultimate unity.” But still the controversy is not resolved.

Whatever one believes, I think Paul’s admonition is well worth keeping in mind: “If I speak with the tongues of men and angels, but have not love, I am a noisy cymbal or a clanging gong.” Even more to the point is Jesus’ commandment to love not only your brothers, but even your enemies. It is easy to talk about loving your enemy theoretically, but the closer the enemy is to your heart, the harder it is to practice what Jesus taught. Rev. Moon went so far as to say we must even love the “enemy of love” who destroys our own family.

Jesus’ final instruction to his disciples as recorded in the Gospel of John was:

No matter how intense the debate is, or how heated the discussion, let’s remember to keep love in our hearts even for those who disagree with us. If we do this, we will succeed where the early Christian church failed, and the future will be bright.

This article is adapted from a sermon the author gave on March 15, 2015 at the Northern Virginia Family Church.

Dan Fefferman (UTS Class of 1986) is President of the International Coalition for Religious Freedom in Washington, DC, and a member of the UTS Board of Trustees. He is also the author of many of the Unification Movement’s best-loved songs. More than 100 of his compositions can be found on SoundCloud.com.

6 thoughts on “The Greatest of These Is Love”