The Geese at Belvedere Holy Rock

It was early morning.
Walking at the Belvedere Estate along the Hudson River…

I continued my walk…
in prayerful wondering about nature’s ways…

Then, one flock of geese returned,
Riding high — as though on an invisible highway
of going places at high speeds —
and somehow, almost decidedly
circling and returning to see the rock where I stood,
their honking stopped…

One by one —
each goose slowed to an abrupt stop way above my head….
Each one glided down,
braking like tiny airplanes preparing for landing…
and each landed gently on the ground near me….

A congregant of geese now stood attentively on the grass,
next to our Holy Prayer Rock on the hillside
(where many prayers have been offered here….)
All awaited in this landscape amidst the spacious beyond.

Again, from the distant sky,
a second honking flock of geese circled around above me
and they too stopped honking….

Noiselessly, one by one,
each began to float down,
with wings extended like a parachute.
Each floating goose
made landing on the grassy hillside.

Their congregation had doubled in size….
Stillness now as they stood waiting and watching.

I, too, in the silence, stood waiting.

But, lifting up from an unknown space within me,
a still, small plea leapt out, demandingly breaking the silence,
I asked: Oh, God, if You are really with me…
Send a third flock of geese…
as a sign…that You Are with me.

Not too long, but as though a few minutes ticking away within me
played at my senses from a clocklike brain;
Not too long, as though from nowhere,
Unabashedly, a third honking flock of geese
zoomed in above my tilted head.
almost decidedly suddenly stopping.
With wings cupped,
as though they were embracing the world of air underneath them…
All floated to the green landing….

The commotion now had ended….
All were gathered at the Holy Rock….
Some just stood motionless in the stillness and attended the sight….
Some bowed their heads…
pecking the grass for manna….
A few cavorted together,
stepping out from their morning dew pews….

I wrote this poem after a meditative walk and discovered that the unfolding of the poem itself mimics the process in meditation when the conscious mind lets go of control and allows the in-breaking of a deeper mind, or unconscious. Hence, the last stanza flowed out naturally as a small epiphanal moment.

The Unborn Again Baby in the ICU

Her crying had ended.
Her cheeks, nose, lips and eyes filled with fluid,
making her look like a rubber doll baby.

Breathing not one breath —
Can this be — that she is unreal,
as though a re-modelling of the original?
How cruel.

She was born and then unborn.
Killed by disease like a cold night frost
that crept into an open window.
Now, just material flesh.

Her life…her eternal spirit
had already left her earthly home
and risen to a higher realm. But…

Who am I, the poet, grieving for?
For myself? You ask, but don’t understand.

I cry for the baby
whose spirit, mind and body never grew
to know her life and fulfillment of love.

I cry for the mother
who has no one to hold and feed.
Her baby, like a doll,
broken and beyond repair —
only to return to the earth, unborn again.

A young mother’s heart longs for her baby,
To rise again –
Like a Second Coming.

This poem was written when I was a hospital chaplain seeing for the first time a seven month-old baby who had died in the intensive care unit. I learned then how the process of writing can be a healing mode to deal with emotions. 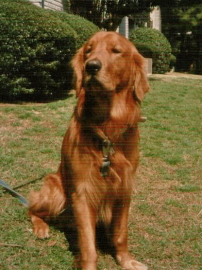 I, an American girl, stood at the Moscow Bread Factory Line in 1993.
The Cobáka, my golden retriever, (Champ), captured the doting attention
bestowed upon this creature of cheerful innocence.
Tail-wagging…teeth smiling…furry warmth nuzzling up
to open-hearted, kind-minded people,
and all were laughing together….
A bit of Peace.

Shoulder to shoulder we stood, eyes seeing, ears hearing…
Hard-working Moscow citizens and me, an American girl,
watching at the day’s end after long patient hours had slipped by.
How the heads turned down like dominoes,
listening to the words spilling from one citizen to the next in line.
“The cashier has no change. You can only buy if you have exact change,”
a babushka plaintively uttered.
Some left and threw up their hands in futility.
(Sigh…just another day at the bread factory.)

Before me, one ordinary man paid 700 rubles at the cashier’s window
for two warm, fresh loaves of brown bread.
And then he turned to me and Champ….
He bent down,
graciously touching the Cobáka’s warm golden head
and gave him one whole loaf of bread.

The poem records an anecdote from my missionary experiences while living in Moscow, Russia, with my husband, Anthony. We missed our dog, Champ, so much, that we had a seminary brother bring him over on the airplane from New Jersey to be in Moscow with us. So, Champ indeed had a mission and earned the title of “the missionary dog or Cobáka.” Cobáka is the Russian word for dog; babushka is the word for older woman or grandmother.♦

Rev. Dr. Donna Ferrantello (UTS Class of 1982) has taught college literature and writing, and engaged in Unificationist endeavors such as overseas missionary work and full-time service as an interfaith hospital chaplain. She earned a B.A. in Psychology at the University of Connecticut and a Doctorate in Theology at Drew University.