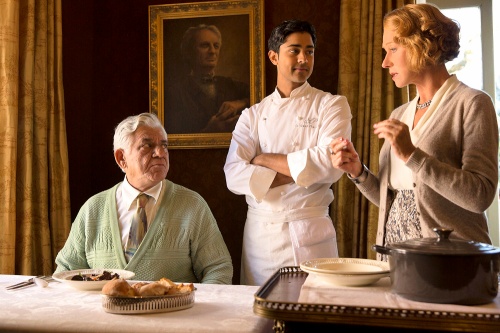 An old adage used to be that there were two constants in life: death and taxes. For the 21st century, it seems that we have two new constants: cultural conflict and food. The news is replete with stories of the latest cultural clash, whether it is Palestinian/Israeli, Black/White, Muslim/Christian, Ukraine/Russia, and on and on. There seems to be no end to the cultural conflicts.

Then there is food. Food plays an important role in our lives. The popularity of top shelf cooking shows attests to this point. Food sustains our life, it comforts us during stressful or difficult times and it brings people together. It certainly isn’t by accident that food has played an important role in Christian ministry and spiritual life. Whether it is the feeding of the 5,000, the Last Supper with the disciples, or Holy Communion, food has been intimately connected with worship and liturgy. This is also true for other faith communities. Food’s ability to reconcile humanity — whether to God or with each other — and to heal our emotional and spiritual wounds is well understood.

This is what makes The Hundred-Foot Journey, based on a popular novel by Richard C. Morais, such a powerful and inspiring movie. Produced by Steven Spielberg and Oprah Winfrey, and directed by Lasse Hallstrom (The Cider House Rules; Chocolat), The Hundred-Foot Journey presents the challenges of getting along in our multicultural world and how food can be the vehicle for reconciliation and forgiveness during times of conflict as it focuses on the dynamic of a family from India and a French restaurateur.

The Kadam family business is food. The second son, Hassan, brilliantly played by Manish Dayal, is singularly blessed with a gift for cooking, a gift he inherited from his mother. Hassan is just beginning his training as a chef when his mother is tragically killed during a riot that also destroys the family’s restaurant. Having nothing left, the Kadam family leaves India and resettles initially in Great Britain before finally settling down in a small village in the south of France.

Within a day of their arrival, Papa (Om Puri), the family patriarch, comes upon a vacant building that is for sale. Believing that his deceased wife has led him there, Papa promptly decides that he must buy the property and open an Indian restaurant with Hassan as the master chef. Not only does this cause dissent within the family but his decision is the beginning point of the battle his family must fight with their neighbor – Madame Mallory (portrayed by Oscar-winner, Helen Mirren) – the French restaurateur – who tries to discourage him from buying the property from the outset. Madame Mallory’s restaurant has already earned a coveted Michelin star but that is not enough. She has been desperately trying for years to gain a second star. As such, Madame Mallory believes that this gives her the right to decide what kind of restaurants should be opened in the village. So for the Kadam family to attempt to open an Indian restaurant in “her” village is simply unthinkable and just not French.

The official trailer for The Hundred-Foot Journey.

Though the family quickly comes to stand behind Papa, the battle with Madame Mallory escalates into a full-scale war with the one hundred feet that separate the two restaurants as the frontline of this war. On the surface, this is a war between competing businesses. But on a more profound level, it is a cultural war. The Kadam family is the first Indian family to settle in this quiet region of France and Maison Mumbai is the first non-French restaurant to open in the area.

At a time in which nationalism appears to be rampant in all corners of the globe, this is a particularly timely film. The fear of the “other” is central to this movie. How do we respond when someone moves in with different customs, different food, different ethnic features, different language, and a different view of life? Unfortunately, all too often we respond with anger and suspicion. Madame Mallory and her staff are no exception. This is seen by a remark made by her chef one evening when he said, “Why do those people have to play their kind of music so loudly all the time. And the smell of curry is everywhere. It permeates everything. It just isn’t French.”

In the midst of all of this fighting and bickering is the young chef, Hassan. A remarkably pure-hearted and genuine person, he becomes increasingly uncomfortable with the constant bickering and fighting that goes on between his family and Madame Mallory. He senses that the way to Madame Mallory’s heart is through service and food. For him, when food is prepared with love and the desire to honor another, the food will sing with its natural joy and beauty. He believes this so much that he prepares a special dish for a special dignitary who plans to dine at Madame Mallory’s restaurant and offers it purely and humbly to her. But she is not ready to receive such a gift of love at that point and so tells him it is terrible and throws it into the garage in front of him though she knows he has “the” gift.

Spurred on by Madame’s action, her head chef sprays a racial slur on the wall in front of the Kadam’s restaurant and his friends firebomb the restaurant. Worst still, both of Hassan’s hands are badly burned as he tries to save his precious cookbooks.

This expression of hatred, though, is a wake-up call for Madame Mallory. Watching the fire consume the restaurant, she comes to the realization that her fear and dislike of the Kadams has fueled this expression of cultural violence. It is in that moment that she understands what she must do. She makes amends by scrubbing off the graffiti, confessing she had lied about his skills, acknowledging his gift for cooking and then promptly offering Hassan a job. Thus begins the healing process.

Madame Mallory does win a second Michelin star with Hassan’s help and Hassan becomes the talk of the French cooking world. He is offered a job at an upscale restaurant in Paris with his picture gracing the covers of major food magazines as one of the hottest chefs in all France within a year. But Hassan chooses to return to Madame Mallory’s restaurant when he discovers that there is a difference between cooking to sustain life and cooking that sustains our spirit and our soul.

The Hundred-Foot Journey is a remarkable film. It is on the one hand a love story about how through food we share our love for one another. It is also a love story between two young budding chefs from two different cultures who must also overcome their own challenges. On the other hand, it demonstrates the power that food has in bringing us together as a community to celebrate our commonalities and our differences. It shows beautifully how food can touch our soul and transform our spirit.

The movie also serves to remind us to slow down and “smell the quiche.” In our busy 21st century lives, we tend to consume our meals rather than sit down and allow the food to nourish and feed both our bodies and spirits. As many of us have learned, the Divine Principle explains that human life is maintained through both the physical vitality elements of air, water and food, and the life elements that come from God and the spiritual world. The Hundred-Foot Journey has captured this point poignantly and has demonstrated how relevant this understanding is for our global context. In this sense, as the movie shows, food truly sustains us in every way that counts. Just maybe if we spend more time eating we will spend less time fighting over our differences. Bon appetite! ♦

Dr. Kathy Winings is Vice President for Academic Affairs, Director, Doctor of Ministry Program, and Professor of Religious Education and Ministry at UTS. She is also the Vice President of the Board of Directors for the International Relief Friendship Foundation.

Photo at top: Om Puri and Manish Dayal star alongside Helen Mirren in The Hundred-Foot Journey. Courtesy of DreamWorks Pictures.

4 thoughts on ““The Hundred-Foot Journey”: Food for the Soul”