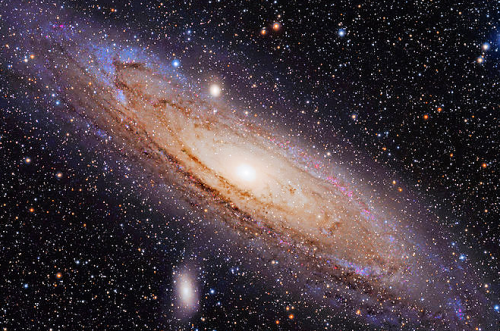 The Divine Principle is unequivocal in its view that the vastness of space, with its quintillions of stars, was carefully designed to be the home for humankind to mature, multiply and have dominion of love. This is implicit in the Divine Principle, since an unfallen human race would quickly outgrow a single planet.

In modern cosmology, the Earth is at the center of the visible universe, a sphere with a radius of 13.5 billion light years. The boundary is 80 quintillion miles away in every direction and is visible in the light of cosmic microwave background radiation. The modern concentric spheres are crystalline but it is the Earth that rotates so that our view of them repeats every 24 hours. These spheres are not simply spatial but spatiotemporal; as we observe farther away in space, we also observe farther back in time. The Sun, for example, is eight light-minutes distant in space and eight minutes in the past as we see it.

The only galaxy visible to the naked eye (other than the home galaxy we are embedded in, the Milky Way) is Andromeda, which is 2.5 million light years distant and we see it as it was 2.5 million years ago.

With a modern telescope, however, we can see billions of galaxies out as far as 12 billion light years and as they were 12 billion years ago. There are about 100 billion stars in the Milky Way and about the same number of galaxies in the visible universe. It is only recently that technology has developed to the point that it is apparent that most of these stars have planets revolving about them, the exoplanets.

In a True Love culture, we can reasonably expect the human population to double every 50 years or so. So Y years after Adam and Eve, the population P of the Earth would have grown to P(Y) = 2Y/50 and the exponential growth would reach, according to the logarithmic graph below, current population levels in only 1,500 years.