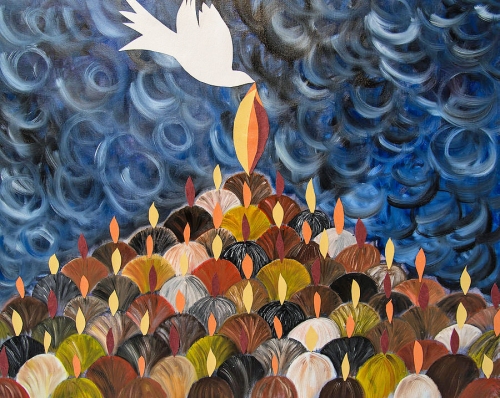 We find ourselves in 2014, when the spirit of “we’re marching to the blessed land of Canaan with delight” is a little harder to come by. We no longer have the power of True Father shielding us. As a consequence, are we bound for demoralization and decline? Or will God’s revolutionary movement maintain and grow?

Let me start by saying that the church was just as messy before I joined as it is now, but somehow God worked through it to save my life. God’s given me more than one second start. God also does that for churches as a whole.

When it comes to second starts, the Jesus movement has had many. It is a religion that continually renews and reshapes itself. Pentecost was the first episode. The foundation for that was that the followers, although demoralized, united in prayer and fellowship. The Holy Spirit came, and Peter gave it a voice in the public square. Even if the dramatic sermon recorded in Acts, Chapter 2, didn’t really save 3,000, what the early Jesus community accomplished changed the world.

They were able to articulate the core gospel, which turned lemons — the crucifixion of a discredited Messiah — into lemonade: salvation through the resurrected Christ who shed his blood to redeem you from sin. Peter and the early community affirmed everything that had come to pass, while giving a dose of judgment to those who murdered Christ, and called it all something God would build on. Then they gave a simple prescription for what the people should do: repent, accept Jesus, be baptized, and follow his way.

The next great reshaping was Paul’s ministry, and I won’t go into that or the 2,000-year story of constant new starts, but will mention one that I observed — the Jesus movement emerging out of a stagnating Protestant mainstream in the early 1970s. This movement gave us mega-churches, cell churches, independent Bible churches, the Religious Right, and, oh yes, Christian rock.

The people who created this movement didn’t plan for all this. They just loved Jesus and the Holy Spirit and went out and expressed their faith in their own way. When the existing churches didn’t accept them, they made their own. Of course, there were false starts and dead-ends, but nothing ventured, nothing gained.

I think we have to do something like that.

We have groups gathered around various members of True Father’s family, and the family is not, at the moment, energetically united. That hampers our global unity, but not really that much. In my experience, the members are as united (or not) as ever. I think we have, on our level, done a good job of maintaining solidarity. We have to be mature and patient, knowing that we have our own family’s shoes to walk in, and don’t need to walk in somebody else’s.

In my view, our global unity comes in the local churches, and this depends upon our local pastors. Our pastors are called to bring people together centered on our gospel that liberates us as couples and families, and liberates us from the history of Satan’s claim on the human race. We have an amazing gospel.

With respect to the Cheon Il Guk Constitution, I’m aware of its flaws. But it articulates the ideals I’ve always held concerning my aspiration to be a child of God, good husband, father and brother, and it calls me to fulfill tribal messiahship. A Supreme Council doesn’t matter that much to me — and I know some of the people on that Council and trust and love them. The Constitution calls me to authentic faith, family life and activity in the local church. And it’s in the local community that success will come, if it comes at all; it’s there that God will work.

Right now, in my church, the Mid-Hudson Family Church (which worships at UTS), our pastor doesn’t focus on the external activities. His messages address personal life, relationships with God, mind and body, with spouse and children — starting with his own. A few weeks ago, he said in a sermon, people are calling for transparency in our national or international church, but what about transparency in myself, with my wife, with my kids? Where am I with that? He said in another, we won’t have a constitutional church until we have constitutional people. And one time he got into rhetoric about realms of heart or Principled life, and then caught himself and smiled and said, you know, that’s very idealistic.

Some members of our church started up a daughter church, a church plant, across the river in Kingston, NY, and it’s charting its unique course, discovering unexpected blessings and ministry potentials that are in the formation stage, too early to talk about. Nonetheless, I honestly think that having two churches within easy driving distance leads to ministry diversification and creativity, and to serving bigger market segments. It was inspiring to me to see that with a solid core group of believers, it’s not that difficult to start up and manage a local church. Now, it’s difficult to make it grow! But not really difficult to make it exist. It takes good leadership. It begins with personal ministry.

Recently, I spent a few weeks in Korea working on the new Cheon Seong Gyeong project. While there, I went to Cheongpyeong on four weekends. I was impressed with how many second generation members were there. There was a 40-day workshop and a large number — perhaps half — were second gen or young first gen. On the ancestor liberation and blessing weekend, there were 400-500 people. I’m not a Cheongpyeong devotee, but I found myself having a deep experience of meditation and repentance during the chanyang sessions (used to be referred to as ansu). I really felt connected to my family as well as nearby ancestors. 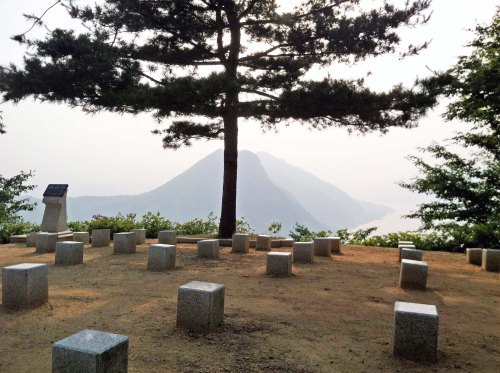 A photo of the Tree of Blessing at Cheongpyeong, taken by the author.

Why bring this up? As I remarked in the late 1990s when introducing the Cheongpyeong director, Mrs. Hyo Nam Kim (Hoonmo-nim), in her visit to the Bay Area Family Church, this is a woman who has gone out and created an amazing personal ministry. It has True Parents’ blessing, as all our personal ministries should, but what she has accomplished is astounding. I’m sure her organization struggles under the surface, because I’ve never seen life without struggle, but the point is it is up to each of us to create our personal ministries. Tribal messiahship means personal ministry.

The founder of the rather amazing Boston Church of Christ testified about why he started that movement. He was criticizing some Christians witnessing on his campus, when he heard God’s voice say, “Do you think you could do any better?”

Well, I heard that Father said Barrytown could be the Cheongpyeong of the West, and I thought to myself: it’s not the property; it’s the leadership. Who is going to make of Barrytown something of the Cheongpyeong scale of success — much less surpass it? I heard the same words: “Do you think you could do any better?”

I’ve heard that a small group ministry is doing very well in Brazil, and it came out of a local church leader. That’s where all religious vitality comes from. Not the headquarters, but the local church. American revivalism appeared on the frontier. Pentecostalism came from a Los Angeles neighborhood. The Second Advent started in a cardboard shack — and that after many setbacks. Our God is a God of second starts.♦

Dr. Tyler Hendricks (UTS Class of 1978) served as president of the Unification Church of America and of the Unification Theological Seminary. He is presently engaged in Dr. Hak Ja Han Moon’s Holy Scriptures project, the production of a Divine Principle video series, and the weekly Holy Marriage Blessing radio ministry, which can be heard live on the web Sundays at 7 am New York time.

Painting at top: “I Will Pour Out My Spirit On All My People,” by Marianne Gonzales.

10 thoughts on “A God of Second Starts”