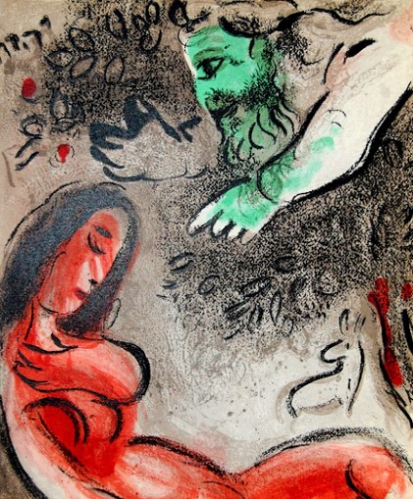 We exist in a world in the throes of great conflict, wherever we turn, internally and externally. There seem to be nothing but conflicting worldviews, animosity and strife. How human beings view ourselves is at the core of this conflict, and also the basis of progress we make towards becoming a true and peaceful society.

At the root of these different points of view is the conceptualization of exactly what humanity is. Are we just a lump of animated carbon? Or an animal? Are we God’s child? Or a “god” in our own right? It seems every culture, ethnicity and race has a different view of this important question.

The ramifications of this point of view cannot be overstated. Every action we take, as individuals, families, societies, and even as a world, depends on the answer we adopt.

The materialist-humanist side of this argument relies on old theories of reality based on Newtonian physics of the last century. The religious side of the controversy tends to rely on scripture, itself millennia old.

Today, we have clear scientific evidence for the ancient origins of man, yet the religious side of the controversy does not have a way to digest that evidence. On the other hand, the materialist side has no answer for the endlessly malleable, creative and faithful nature of mankind, other than “chance.” This is a very unsatisfactory answer for most people.

What is needed is an understanding of humanity that takes both views into consideration: humankind’s connection to the natural animal world, as well as the origins and ramifications of our eternal, spiritual nature. We must clearly explain “man the animal” and “man the eternal spirit.”

“Then the LORD God formed a man from the dust of the ground and breathed into his nostrils the breath of life, and the man became a living being.”

Yet modern scientific theories indicate that all humankind alive today originated from a common woman. Wikipedia says “Mitochondrial Eve is estimated to have lived between 99,000 and 200,000 years ago.”

What both views express is that all human beings come from one common base couple. Whether or not you call them “Adam” and “Eve” is a minor point in the grand sweep of things.

These facts, that the Bible claims a common parent for humankind, or that science increasingly shows us the same story, should not be considered to be in contention anymore, at least by those who really want to understand the truth of our origins.

The question that should be asked is a little different: “What were Adam and Eve, our common ancestors, who were probably created 200,000 years ago?” After all, what day and year they were created is not the issue here. Can we reconcile an increasingly detailed scientific picture with a religious tradition thousands of years old? More fundamental is the question whether we are a created race of divine children or “just” animals.

Behind the refusal of many to engage the “other” side on this question are two fundamentally different worldviews as well as on the responsibilities of humankind.

The first, from the humanistic side, is essentially the concept that we are simply expressions of nature, with no “supernatural” antecedents (read “God”), and we have no responsibility to anyone but ourselves. We have no value different than any other animal and therefore systems of “right and wrong” (read “religion”) are immaterial and foolish.

The religious side of this argument basically is: “We are God’s children, created 6,000 years ago. How we live our lives has eternal consequences and we are responsible to a higher source of goodness than just ourselves (read “God”).

It is not difficult to see why there is such a great divide between these two worldviews; they essentially devolve, not to the question of our origins, but to our responsibilities. On one side, I can do “anything I want” because we are just animals. The other side of the controversy comes down to this: “I don’t care if it’s illogical; I will hold my position because I know I am God’s child and He created us. I have my value because God gave it to me. I am less than God and my life is according to His will”.

How can these two very different viewpoints be reconciled? At first glance, it seems to be impossible, especially as both perspectives are more fundamentally focused on self-centered concerns rather than God’s point of view.

Just as there is an ever-growing body of scientific data that indicates that 200,000 years ago all of humanity originated from a common woman (which the religious world may call “Eve”), there is also an ever-increasing body of evidence for life beyond the body. From almost universal cultural accounts of “moving into the light” as people die, to an increasing number of experiments showing the efficacy of prayer in health, healing and happiness, the evidentiary basis for a life of spirit is becoming ever clearer.

But how to harmonize these two worldviews? The answer must be sought at the beginning, asking the question “What were “Adam” and “Eve” when they were created, rather than when they were created. We find evidence for the answers in the Bible as well as in spiritual logic and scientific data.

“Then the LORD God formed a man from the dust of the ground and breathed into his nostrils the breath of life, and the man became a living being.” 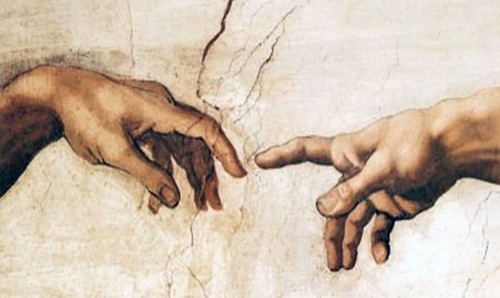 Detail from “The Creation of Adam,” a fresco by Michelangelo, forming part of the Sistine Chapel ceiling, painted circa 1511-12.

Reverend Sun Myung Moon taught in the Divine Principle that humankind was meant to be the “kings and queens” of creation by their parent, God. This view is also backed by numerous biblical passages indicating God’s hopes for His children were that they would become like Him, which must be the hope of any rational, loving parent. This is why Jesus said in Matthew 5:48:

“You must be perfect, as your heavenly father is perfect.”

In order to be “kings and queens” of a domain, wouldn’t it be mandatory to come from that domain? How could any subject of the royal couple accept their right to rule if the proposed couple had nothing in common with the ruled? Of course, they could not be accepted into such an intimate role over creation if they had nothing to do with creation.

This is why, when God created us, He created “from the dust of the earth” (Genesis 2:7). Examining the human body from this perspective, we find interesting parallels with all of creation: our bodies are approximately 70% saltwater and 30% minerals; the earth is approximately 70% saltwater and 30% land. Our blood vessels, breathing apparatus and various other systems are copies of natural processes and systems within creation, such as the pattern of roots and branches in trees, or the pattern of water disbursement in a river system. The question we are dealing with is why we are created in the image of creation, not if we are.

Just as at the very beginning of the physical universe, its characteristics were determined, not by the matter (at that time they were only photons) of the universe, but by the immaterial aspect of direction of the spin of those photons (see this video), so human nature was created not as a result of our physical bodies, but as the result of a direct immaterial bequeathal from our parent God.

Adam and Eve’s bodies did indeed come from the creation., The “parents” of their physical bodies could have been a Neanderthal couple. But the quality that made them “Adam” and “Eve” was not their physical parentage, but their eternal parentage. God bequeathed to this first human couple His eternal nature, or soul; thus he

“…breathed into his nostrils the breath of life”

We have allowed the scientific and religious concepts of the last century to dictate our understanding of ourselves as children of God. It matters little that our bodies evolved from the creation; in fact it was critical that they do so. The question is how we take responsibility for the gift of soul that our direct parent God bequeathed to us. In the end, both our bodies and spiritual natures are given to us by our physical parents, but with the birth of each human child, God Himself gives our eternal soul. It is our job to use the “latticework” of our physical/spiritual mind and body to give that soul the form it will have for eternity. God gave us absolute responsibility to do that and even He cannot do that for us.

The question, of course, from our perspective, and that of God and creation, is what will we do with our creative uniqueness?

We have the choice to grow up and manifest our divine natures, or to remain as “persistent and creatively immature” life forms, sowing chaos and suffering in our wake. The choice is literally up to us. If we understand ourselves to be unique creations that are eternal souls, rather than mere animals living meaningless lives, our path towards bringing value to the universe will be much shorter. Without understanding this, we are destined to be the ones that sow suffering in our wake.♦

Dave Tranberg is a 36-year member of the UC and an elder member of the Atlanta Family Church. He recently was the District 5 education director and has been involved in most cross-cultural, inter-religious efforts of the FFWPU-USA.

3 thoughts on “The Meaning of Humankind”