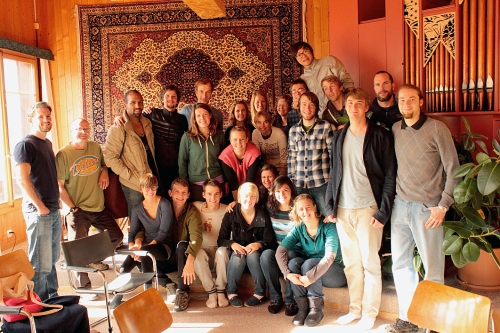 In fall 2014, I lived for two-and-a-half months with a small, Evangelical Christian community in Greatham, England, called L’Abri (French for “the shelter”). The L’Abri Fellowship in Greatham is one of eight such communities which have been established around the world and grew, like the rest, out of the pioneering ministerial efforts of Francis and Edith Schaeffer.

Although I was at L’Abri for only ten weeks in my senior year of college, I was transformed by my experiences there. Deep wounds began to be healed and confusions clarified; the spiritual life as fundamentally a relational life with God, others, and even myself began to open like never before, as concepts of faith became lived realities.

I experienced challenges, of course, understanding for the first time key differences in belief, from a Christian perspective, between the Christian and Unificationist worldviews, and carry fundamental questions of faith that arose from my time there even now, almost four years later. Principal among these is the question of the replicability of L’Abri as a model of spiritual community.

Were there spiritual principles at work in the structure, practices, and functions of L’Abri that allowed it to so deeply touch not only my heart and life but the hearts and lives of many others? Could these principles be applied in another context, for instance, either an extant or a potential Unification faith community?

My time at L’Abri and other experiences in the last few years have convinced me of the value of having the home serve as the hub or basis of ministry, as well as True Father’s prescience when he attempted to initiate the home church providence in the Unification Movement over 40 years ago.

I don’t think that the work of L’Abri fully answers the question of how Unification members should proceed with home church today. But I do think the current relevance of their work reveals a need and an entry point for the renewal of this kind of ministry

When I first left for L’Abri, I had little sense of what the experience would entail. I had heard about L’Abri like most others who have walked through the doors of its various branches around the world, by word of mouth, since L’Abri has eschewed any formal advertising about their work.