These days Unificationists may ask themselves, “Where are we in the providence? Where is God’s work headed?” When Reverend Moon was alive this was not a pressing issue, because he set the direction and we could simply follow.

But since he passed on in 2012 to take his place in heaven, things on earth have not been so simple. Furthermore, in 2013 Foundation Day arrived, proclaiming the victorious conclusion of the providence of restoration, but where did that leave us?

In my experience, every time Father made a providential announcement, it typically took three or four years to comprehend its meaning. It’s the same today; we needed some distance in time to understand what has happened since the dramatic events of 2012 and 2013.  Now in 2017 we can begin to see more clearly how the providence is changing and where it is heading.

Of course, the most obvious change is that Dr. Hak Ja Han Moon, True Mother, has begun putting her stamp on the movement. Also, we are coming to know God not just as Heavenly Father but as Heavenly Parent, and some of us are exploring what it means to relate to God not only as Father but also as Mother.

Change has always been a feature of God’s providence. Reading the Chambumo Gyeong, we can see the movement has passed through different eras, from the early days of pioneer missionary work, to the 1980s when we confronted communism, to the 1990s when we developed an interreligious and international family movement for peace, to the 2000s when we could witness the dawning of God’s royal sovereignty.

As the providence advanced from one stage to the next, we had to change our mindsets to adapt to new realities and challenges. So what is new about the reality of this era, and how should our mindset change to better align with the era of True Mother?

First, it is the era of women. In coming to value True Mother, we are beginning to understand what it means that she is the embodiment of Mother God on earth. She always had that value, but formerly when True Father was carrying the burden of the providence on his broad shoulders, her value was largely hidden. Now that True Mother has stepped up and come into her own, we can discover new facets of Heavenly Parent — the feminine ones — to treasure and incorporate into our own lives.

For a man like myself, this begins with listening to my wife and not moving forward without her agreement. It means valuing women’s opinions and listening more. Women should be rising up to lead, but first men, who have been culturally conditioned for 6,000 years to believe that leadership is primarily a man’s job, need to restrain their sense of entitlement and give women space where they can develop and manifest their light. Then True Mother will be able to see her daughters, her second selves, rising up throughout the world.

Second, we need to give more emphasis to the Principle of Creation in the way we lead our lives. The providence of restoration through indemnity, which True Father led, was entirely aimed at defeating Satan. What, then, are the full implications of the fact that Satan has surrendered? Our traditional way of life in the Principle was to make indemnity conditions, but Father declared toward the end of his life that the world is no longer ensnared to anything having to do with the Fall, including indemnity.

This opens the possibility we can move forward to build better families and a better world by means other than paying indemnity. The rigors of the indemnity course were required to defeat an archangel. This was a masculine approach — sacrificing and fighting until he submitted. Indeed, the way set out by Unificationism has been strongly masculine, a world of Cains and Abels that needed to be set right by one brother surrendering to the other. But with the archangel having been defeated, what now? We can always identify more archangels to subjugate, but should we stay on that level? Casting judgment on sin and treating the world as an ideological battlefield can only take us so far.

In a family that lives by the Principle of Creation, both the father and mother are needed for the best flow of love. As a father and a mother have different ways of leading their family, we can see the masculine approach of separating Satan and subjugating Cain needs to be counterbalanced by feminine approaches to solving problems. In the family, a feminine approach to resolving conflict might be to listen to each side’s concerns and go deep into the reasons why anger and other negative emotions arise. It might bring growth and increased understanding, rather than subjugating.

Thus we can see that in the era of True Mother the time has come to rebalance the scales for how we proceed with the project of building God’s Kingdom by uplifting the hitherto hidden feminine side of God and Her works. 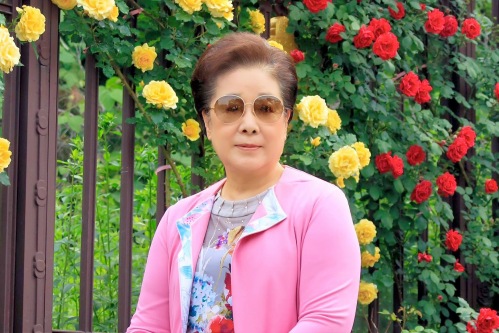 As True Mother strives to realize the Principle of Creation, there are many points of her leadership we can emulate. Let me point out a few:

First, it goes without saying that she, more than anyone else, honors True Father, treasures his words, and seeks to complete what he began. She alone honored the traditional Korean way of mourning by attending his tomb nearly every day for three years. None of his children did that; only Mother. She honored his words by packaging them in the three Cheon Il Guk scriptures — a more attractive and accessible collection than the diverse group of texts Father designated as the Eight Textbooks. Chambumo Gyeong in particular gives us an understanding about the course of True Parents’ life and the steps they took in pursuing God’s providence that were largely unknown until now.

Second, when True Mother speaks, there’s deep heart in every word, expressing the hyo jeong she speaks of. That is the center we connect to when we go out to face our missions. We can succeed if we keep that heart at the center and work together, balancing the masculine virtue of individual initiative with the feminine virtue of collaboration that values each person’s input. Thereby, the movement can manifest spherical harmony.

Third, True Mother is a builder. At Cheongpyeong she is building a beautiful complex of buildings to showcase True Parents’ teachings and accomplishments. It is where the Kingdom of God can be seen and felt as real. It doesn’t matter that the Hyo Jeong Cheonwon, as the Cheongpyeong complex is now called, is only a small place in the land of Korea; at least there, people will touch something substantial and get a glimpse of the heavenly kingdom. Beyond conditions and foundations, that is a substantial result, a model which can be expanded and emulated.

Fourth, True Mother is creative and expresses her own uniqueness. She operates from the divine center within her own self. She has her own style, different from True Father’s. For one thing, she doesn’t preach for hours on end or give numerous detailed directions to follow. Her message is always short: take responsibility for your tribe and your nation. In this, she also gives us room to be creative and express our own uniqueness in tackling the challenges before us.

I believe True Mother wants to be surprised and delighted with the results we bring. Have you ever thought that even God might like to be an object partner who takes delight in responding to us? The deepest desire of the Heavenly Mother side of God is to be our Object Partner who delights to behold the fruits of Her children’s lives — their love, dignity and righteous activities for the Will. When our Heavenly Parent rejoices in this way, we complete the circle of giving and receiving that is the Principle of Creation.♦

Adapted from the author’s article appearing in the April 2017 issue of True Peace magazine.

Dr. Andrew Wilson (UTS Class of 1978) is Professor of Scriptural Studies at Unification Theological Seminary. He edited World Scripture: A Comparative Anthology of Sacred Texts and World Scripture and the Teachings of Sun Myung Moon.

9 thoughts on “Our Alignment in the Era of True Mother”