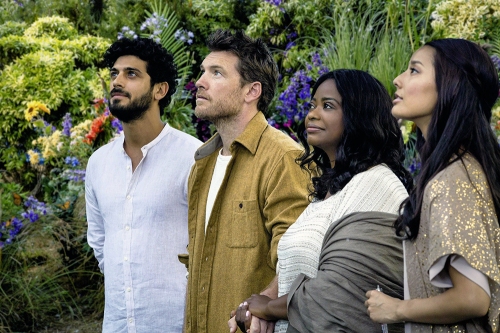 It is not often a reflective and innovative film that is deeply theological comes to the big screen – and is worth our time and attention. But “The Shack” fits this bill nicely. Not unlike “Heaven is for Real,” “The Shack” reminds us we are never alone, that God is always there with us. And what “Heaven is for Real” did for reimagining the spiritual world, “The Shack” does for the holy trinity of Father, Son and Holy Spirit.

The movie tells the heart-wrenching story of Mack Phillips (played by Sam Worthington), a family man who must endure the disappearance and presumed death of his youngest daughter and make sense of a loving God.

The film begins with a brief but critical glimpse of Mack as a young boy who witnesses his abusive yet church-going father beat his mother at the slightest provocation. After Mack confesses to the family pastor about the beatings, his father beats him again, pushing the young boy to take drastic action, which turns into a secret that haunts him throughout his adult life. Mack’s wife, Nan (Radha Mitchell), knows he has a secret eating at him but she cannot convince him to talk about it. Nor can his neighbor, Willie (Tim McGraw), a faithful and God-loving man.

As a loving husband and father, it is clear Mack cannot seem to come to terms with a God who is there for us, loves us and to whom we can turn. After all, why did God allow his father to treat his wife and son so terribly? Would an omnipresent loving God really do that? Because he cannot find answers to his questions about God, he forms an uneasy truce with God. At the same time, he feels his wife’s faith is strong enough for both of them for the time being.  What is interesting is his wife’s nickname for God. She calls him “Papa,” with her children following suit.

A catalyzing event occurs one summer when Mack takes his three children camping to their favorite lake while his wife must stay behind. During this fateful trip, his youngest daughter, Missy, suddenly disappears while Mack is focused on saving his other daughter and son who become trapped under their canoe while boating. One moment she is there coloring her pictures and the next minute, she is gone; a parent’s nightmare.

Though Missy is never found, it is clear a stranger has probably taken her, an act that the authorities believe he has done before. And while Missy’s body was never found, parts of her clothing are found in a dilapidated shack near the campground, which leads authorities to declare her dead at the hands of her abductor.

Missy’s death throws a pall over the family. It hits Mack and his oldest daughter the most, with both of them withdrawing into themselves, feeling guilty and angry at the same time. It is during this long mourning period that Mack receives a mysterious note one snowy day in his mailbox inviting him to the shack where it is assumed Missy had died. The note is signed “Papa.”

Not finding any leads as to who sent him the note, Mack decides to go to the shack and confront “Papa.” When he arrives, the shack is just as empty and dilapidated as he had left it in summer. Frustrated, Mack begins to leave when he sees a young man walking through the forest. At first, Mack assumes he is the man who kidnapped his daughter and is prepared to pass judgment on him. Instead, the young man beckons Mack to follow him, as if he has been waiting for him.

Mack soon finds himself in front of what was the shack but is now a warm and inviting cabin and meeting three living, breathing people. He is quickly introduced to “Papa” (Oscar-winner Octavia Spencer, from “Hidden Figures”), Sarayu, the Holy Spirit in the form of a young Japanese woman (Sumire Matsubara), and Jesus (Aviv Alush), in the form of a modern young Middle Eastern man with a ready smile and understanding eyes.

The official trailer for “The Shack” (courtesy Lionsgate Films).

Thus begins Mack’s strange and life-changing encounter with the Holy Trinity.  It is clear God is trying to reach out to Mack to help him learn to forgive, love and have real faith.  Each member of the trinity plays a very specific role in guiding Mack to simply submit his heart and soul to God and develop a generous faith.

At a time when we have been encouraged to pray to our “Heavenly Parent,” the portrayal of God not only as “Papa” but also as a black woman is creative and relevant, to say the least. “The Shack” shows how far we have come from the traditional Hollywood portrayal of God as an all-powerful, almighty and extremely masculine male deity.  It was not lost on me either that most of the conversations Mack has with “Papa” are either while preparing a meal, eating a meal or having a cup of tea. Again, a re-imaging, if you will, of the Lord’s Supper. It is also interesting to see the “Holy Spirit” as a young Asian woman who tends an unusual garden.

Jesus, on the other hand, is more in line with how Westerners often think of him – a gentle, kind, heartful man who also walks on water. However, we don’t see a Jesus who is simply depicted as beatific, trite or namby-pamby – to borrow the words of Peter Marshall, the famed U.S. Senate chaplain. This Jesus is more real and his conversation with Mack is honest and realistic — in other words, someone we can relate to in 2017. For a short period, “Papa” is portrayed by a man (Graham Greene) because, “We thought that you needed a man’s support for this next part of your journey.” But even then, God is seen as a native American.

Does the film contain Oscar-worthy performances? No, but I did not find it sappy and saccharine. The lessons are straightforward and it is not so much about telling Mack what to believe or feel as it is about guiding him and providing the environment in which he can probe his soul, mind and heart and experience an honest and real faith.

More importantly, I found the film to be particularly timely. Today, it seems so difficult to forgive those “who trespass against us” and to love “one another as we have been loved” and to have a faith that “moves mountains.”  And we continue to see atrocities committed in the name of faith and God. At times, we seem to grow further and further away from these ideals.

We need films such as “The Shack” to remind us about what is important. I know that when the movie ended, the audience was not quick to get up and leave. There was an aura of having just witnessed a sermon by our Heavenly Parent. It was palpable. And as we finally made our way out of the theater, I like to think that each one of us was saying a little prayer comforting God’s heart and thanking “Papa (and Mama)” for this cinematic reminder.

See if you don’t feel the same way when you see the film.♦

Dr. Kathy Winings is Vice President for Academic Affairs; Director, Doctor of Ministry Program; and, Professor of Religious Education and Ministry at UTS. She is also Vice President of the Board of Directors for the International Relief Friendship Foundation.

2 thoughts on “An Encounter with the Holy Trinity: “The Shack””