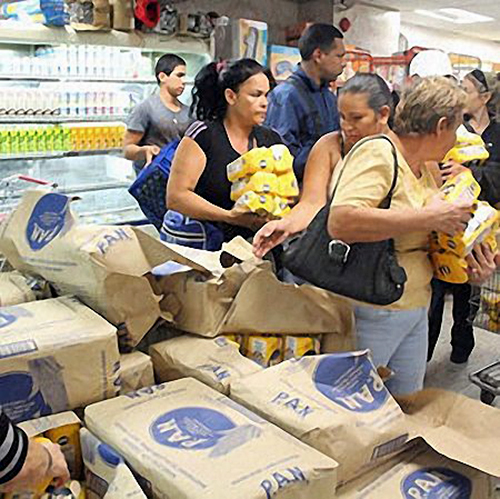 I had been in Caracas for just a few days in June when a friend called me and excitedly said, “I have good news. They are selling sugar here and each person can buy four kilos. Come quickly with whoever is at home.” It was a 20 minute bus ride away and then we had to wait over an hour in line. But one spurns such opportunities at one’s peril in Venezuela in recent years.

I never had this experience when living in Caracas in the late 1990s, but this is now the norm. When visiting in March, I asked a clearly irritated mother, just leaving a supermarket, how long she and her young son had waited to buy harina pan, the cornmeal flour used to prepare the Venezuelan staple arepa. “Three and a half hours” she snapped. I could only sympathize and decided not to wait in line myself. The shops are now forbidden to sell this most essential product to anyone under 18, as, with its sale being rationed on the rare occasions it can be bought, whole families wait together in line to maximize their purchasing power.

The harina pan and sugar story is the same for toilet paper, milk, coffee — indeed over 25% of all necessary staples are rationed, being rarely available, according to the last scarcity figures published by the central bank in January. Even the government admits that the poverty rate leapt from 21% to 27% last year, mainly because incomes failed to keep up with soaring inflation, now officially over 60%. The economy is set to shrink this year by at least 1% according to even the government’s predictions. Yields on Venezuela’s sovereign debt skyrocketed in the past year, to just under 14%, tops among 50 emerging markets tracked by JPMorgan Chase. The latest hard-to-find item — coffins!

Venezuela, an oil-producing nation of just over 30 million, has fallen out of the news since the mainly student-driven protests against the government earlier this year lost momentum in the face of the aggressive government response that left over 40 dead, the majority protesters, over 800 injured and 2,800 arrested, 160 of whom are still in prison. One student leader, who I know personally, was arrested on the completely false charge of buying a car using counterfeit U.S. dollars. On being released and before leaving the country (he has since returned), he confronted his accuser, who in tears told him that the police told her that if she did not make the accusation they would take her son.

This was not an idle threat. It is estimated that over 20% of all crime in the country directly involves the police or the omnipresent National Guard. Venezuela’s police have been identified by Transparency International as being among the most corrupt in Latin America (it ranks Venezuela at number 160 of the 177 nations in its Corruption Perceptions Index 2013). There have been countless incidents involving drugs being trafficked from Venezuela with supposed aid from corrupt officials. In September 2013, an incident involved three members of the National Guard placing 31 suitcases containing 1.3 tons of cocaine on a Paris flight, astonishing French authorities. According to a former Venezuelan Supreme Court Justice, who escaped arrest in Caracas and is now in the U.S., he was forced to acquit an army commander who had connections with a two metric ton shipment of cocaine. He also claimed that several current and former senior officials were involved with the drug trade in Venezuela. In mid-February 2014, a commander for the Venezuelan National Guard was stopped while traveling with his family and arrested for having 554 kilos of cocaine in his possession. With convictions for those arrested for any crime running at less than 10%, the legal deterrent to criminal activity is very weak and much crime goes unreported. It never occurred to me to go to the police on the occasions I was mugged.

Violent crime is rampant, at least tripling under President Hugo Chávez, while murders have quadrupled in the last 15 years. The government stopped publishing homicide rates several years ago, but private groups say more Venezuelans were murdered last year, one every 21 minutes, than in North America and Europe combined. The Venezuelan Violence Observatory estimates that 24,763 killings occurred in 2013, pushing up the homicide rate to 79 per 100,000 inhabitants (122 per 100,000 in Caracas), despite the government’s claim that in 2013 the murder rate decreased by 18%. By comparison, about 9,500 died in Iraq, a nation at war with a larger population (over 34 million). In Venezuela, it was 73 per 100,000 people in 2012. In 1998, when Chávez first came to power, the rate was 19 per 100,000, the same as Chicago, America’s deadliest city in 2012. Chávez, like his supporters around the world, said little about the crime epidemic affecting every aspect of his nation that coincided with his “revolution.” According to the World Economic Forum’s Global Competitiveness Report 2013-2014, Venezuela is the worst in the world for attracting talent and second-worst after Myanmar for retaining it. It comes in at number three for the economy most damaged by violence.

The protests coincided with the lavish celebrations of the first anniversary (March 5, 2014) of the death of the extremely polarizing leader of the so-called “Bolivarian Socialist Revolution,” Hugo Chávez, attended by Raul Castro of Cuba, Daniel Ortega of Nicaragua, and Evo Morales of Bolivia. Chávez is hailed as a hero by many, such as director Oliver Stone, whose documentary, Mi Amigo Hugo (“My Friend Hugo”), was released for the anniversary, and other Hollywood stars, like Johnny Depp and Danny Glover. A year after his death, the image of Chávez remains present in every government speech, in advertisements on state television or the Caracas metro where all other advertising is forbidden, in “miraculous apparitions,” and even in the institutions of government. Mercifully, the previously ubiquitous banners with his motto of “socialismo o muerte” (“socialism or death”), have almost all disappeared. Chávez himself asked for them to be changed when faced with his own mortality.

Chávez, granted total power by an acquiescent National Assembly, endorsed by a compliant judiciary and supported by the armed forces from which all potential voices of dissent had been purged, accomplished much, from one perspective. Caracas and the major cities of the country all have evidence of the almost 300,000 (government figure; interestingly the Central Bank uses a figure of 100,000) viviendas dignas (dignified dwellings) built on the bounty of the greatly increased oil revenues, the price of which Chávez did much to raise from $8 per barrel in 1998 when he was first elected. Schools, universities, hospitals, subway lines, even cable car transport have been built, and poverty and malnutrition greatly decreased. Free medicine, dentistry, eye care, and education have penetrated deeply into the slums around the nation. 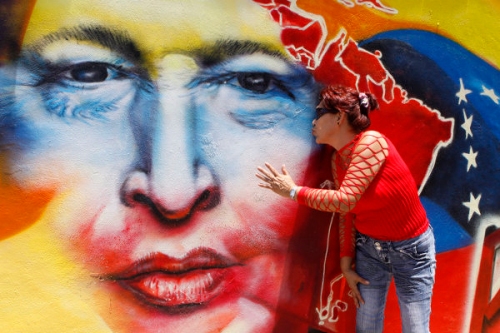 A national hero, especially to the poor, Chávez is quite the opposite to the minority that may become the majority, holding “El Commandante Supremo” responsible for the growing ills of the nation, inherited by his named successor, Nicholás Maduro, once a bus driver. Many are concerned with the economic effects of Venezuela’s support for Cuba, the amount of aid being poured into Nicaragua, Bolivia, Haiti, and elsewhere. In nominal terms, at least, Caracas looks to be as open-handed towards Havana as Moscow ever was.

According to economist Carmelo Mesa, Venezuela bankrolled Cuba to the tune of $9.4 billion last year. The Chávez administration’s spending on South-to-South aid in proportion to gross national income was second only to that of Saudi Arabia.  “Venezuela today is a country that is practically occupied by the henchmen of two international criminals, Cuba’s Castro brothers,” recently declared Luis Miquilena, who served as Chávez’s Minister of Justice for three years before finally resigning in disgust. “We are in the hands of a foreign country,” in reference to the 30,000-50,000 Cubans now in Venezuela.

Few understand the increasing influence of China in Venezuela following the signing in 2007 of a mutual cooperation fund. The binational fund served as a loan arrangement for the Chavista government, paid with oil shipments. So far, Venezuela has received $86 billion to finance development projects. Many have begun to accuse the current administration of President Maduro of preferring Chinese investments over domestic ones. Last month, Chinese President Xi Jinping visited Venezuela as part of his Latin American tour and signed an oil deal.

It seems that many of the seeds sown under Chávez are seriously threatening Venezuela’s future. Grand visions, such as a railway line connecting three of Venezuela’s four largest cities and a port over extremely challenging terrain, stand unfinished after an unknown amount of investment, symbolizing to me the failure of the socialist Bolivarian revolution. It forgot that the only real, lasting revolution is the “revolution of the heart.”♦

David Stewart studied modern history at Oxford. He worked as a state leader in the U.S. after UTS graduation in 1985, then moved to the USSR in 1991. He left in 1996 to move with his family to Venezuela as a National Messiah. He now lives in Canada and visits Caracas as often as possible.

5 thoughts on “Chávez’s Legacy and Worsening Conditions in Venezuela”