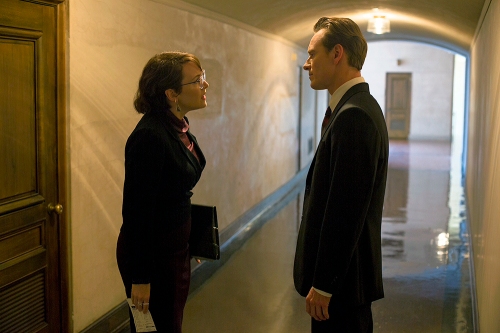 When Steve Jobs died in 2011, his authorized biography was rushed to press, quickly followed by the low-budget, independent film, “Jobs.” Fans of the Apple CEO had to wait until last October for the full Hollywood production, “Steve Jobs,” featuring an A-list cast and team, to reach the big screen.

Audiences were disappointed in the film because it bombed at the box office. Expectations surely were for a depiction of Jobs’ stellar technology and business achievements. But the truth is: this movie is more about its heroines than its hero.

For her performance in “Steve Jobs,” Kate Winslet won the 2016 Golden Globe for Best Supporting Actress and was nominated for an Oscar this year as well. She plays Joanna Hoffman, long-time marketing chief at Apple and “right-hand woman” to its co-founder. Known as the one person who could stand up to the difficult and temperamental Jobs, in the film Hoffman calls herself his “work wife.” Winslet, as Joanna, is the moral center of the movie.

Very loosely based on the Walter Isaacson official biography – a book Apple and Jobs’ family were not happy with – “Steve Jobs” is written by Aaron Sorkin, who won the 2011 Best Adapted Screenplay Oscar for “The Social Network” and this year’s Golden Globe for Best Screenplay for “Steve Jobs.”

“Steve Jobs” was lucky to get made. It was originally produced by Sony Pictures, but after North Korea hacked its computers in late 2014, divulging embarrassing executive emails, Universal Pictures acquired the film. A who’s who of actors and actresses were considered for parts. Oscar-winning director, Danny Boyle, chose Michael Fassbender — despite looking nothing like Jobs — for the title role (he was nominated for the Best Actor Academy Award).

Jobs’ widow, Laurene Powell-Jobs, encouraged Isaacson to write his book, but her eventual dissatisfaction with it, as a less-than-flattering portrait of her husband, led her to reportedly block the film’s production. However, there may have been a more underlying reason.

In 1978, Jobs fathered a daughter, Lisa, with girlfriend Chrisann Brennan, and for years denied paternity. Chrisann lived on welfare with Lisa and cleaned houses; though a court ordered the multi-millionaire Jobs to pay child support, they continued to suffer financial hardship. Years later, Jobs would acknowledge Lisa and attempt to reconcile with her. Chrisann wrote that Jobs “apologized many times over for his behavior” to her and Lisa and “said that he never took responsibility when he should have, and that he was sorry.” Jobs’ sister, author Mona Simpson, is credited with repairing the relationship between Lisa and her father, though Jobs’ relationship with Chrisann remained contentious throughout his life.

Prior to penning “Steve Jobs,” Sorkin talked candidly at length with Lisa Brennan-Jobs, and despite the rich biographical material in Isaacson’s book, including dozens of interviews with Jobs, he decided to make Lisa the core of his screenplay. Sorkin augmented Isaacson’s research with new insights from Lisa (who had not wanted to be interviewed by Isaacson because her father was then still alive).

The film is essentially a three-act play (interspersed with flashbacks), each act focusing on backstage scenes before a major product introduction, and Lisa figures centrally in each – as does Hoffman. Sorkin later said that getting to know Lisa, and having a young daughter of his own, led him to focus “Steve Jobs” on a theme deeper than technology or “changing the world.” He implied the key to understanding Jobs the man was his process of growth to fully embrace Lisa.

Winslet worked hard to be cast as Hoffman. The Oscar-winning actress, who also won this year’s British Academy and London Film Critics Circle awards for her “Steve Jobs” role, explained about Joanna in an interview:

“Joanna wasn’t just a hotheaded Eastern European woman screeching at Jobs. She was a sister, his friend, and a little bit of a mother. Her recognition of who he was as a person and her acceptance and love of him, warts and all, was an admirable quality. I’ve spent time with people like Jobs, and just because people are [difficult] doesn’t mean they don’t have a heart and soul.”

Boyle and Sorkin’s “Steve Jobs” rearranges many of the facts about Jobs and Apple for dramatic effect, clueing audiences this is not a biopic, but almost a morality tale. Winslet’s best scenes are when she engages Jobs one-on-one before he goes on stage for a product unveiling.

In Act I, Chrisann and five-year-old Lisa, come to Jobs’ backstage dressing room before the 1984 unveiling of the original Mac to ask him for financial support. They depart dissatisfied, as Jobs again denies paternity. When alone with Steve, Joanna pleads, “You must be able to see that she looks like you.” Steve ignores her. “I know you heard what I said,” she shouts. Jobs then insists it’s statistically almost impossible he’s Lisa’s father, but just the same, he’s going to give Chrisann money and buy them a house. Joanna retorts: “There’s a small girl who believes you’re her father, that’s all, that’s all the math there is. She believes it. What are you going to do about that?” At which point, Steve mutters “Gimme a break,” and rushes out the dressing room.

Act II occurs after Jobs was fired from Apple, at the 1988 introduction of his ill-fated NeXT computer. In his dressing room, Jobs finds Lisa, who’s come to be at her dad’s product launch. She’s examining the NeXT cube computer with a ruler, and Steve discovers she has a keen sense of design for a fourth grader. Then, in a backstage chat with Lisa, she bends over backward for his attention, engaging him about things she’s interested in. Although Steve insists she should be in school that day, she puts her arms around her father’s waist and hugs him, as Joanna gazes intently at them. His relationship with Lisa has grown, despite continued friction with Chrisann.

The third act takes place before the 1998 introduction of the iMac, the first new product after Jobs returned as Apple CEO. Joanna goes over sales projections for its launch and proclaims he’s brought Apple back from life support and the iMac will become the fastest-selling computer in history. She then observes, “It’s over…you’re going to win. It would be criminal not to enjoy this moment.” Jobs responds, “I’m enjoying it.” Seizing the opportunity, Joanna insists: “Make things alright with Lisa.”

Jobs then whines about Chrisann and contends Lisa is now trying to spite him. But Joanna ignores his grumbling and again insists Jobs fix things — now. Winslet, at her best as Joanna, confronts Steve and, flinging press packets to the floor, demands he fix his relationship with Lisa once and for all: “Fix it or I quit, how about that? I quit and you never see me again?” “What’s wrong with you?” he asks. She opens up, tears running down her cheeks:

“What’s been wrong with me for 19 years?! I’ve been a witness and I tell you I’ve been complicit. I love you, Steven, you know how much. I love that you don’t care how much money a person makes, you care what they make. But what you make isn’t supposed to be the best part of you. When you’re a father, that’s what’s supposed to be the best part of you and it’s caused me two decades of agony, Steve… It is a little thing, a very small thing, it’s not a big deal, fix it, fix it now or you can contact me at my new job working anywhere I want!”

Teenage Lisa reappears in Act III, and the film concludes in a powerful closing scene with Steve, Joanna and Lisa, which, though deviating from historical fact, is filled with emotional truth.

Hollywood often portrays larger-than-life figures. In “Steve Jobs,” Boyle and Sorkin utilize two women, in supporting roles, to tell a story of how the most “successful” in society, in this case an American icon, often miss recognizing what is truly important and right in front of their noses.

Unificationists understand we live in a post-Foundation Day world, where women can now act as healers and peacemakers as never before. Watch “Steve Jobs” to see why the heroines steal the show.♦

Dr. Mark P. Barry is Managing Editor of the Applied Unificationism blog and Lecturer in Management at UTS.

2 thoughts on ““Steve Jobs”: A Film Really About Heroines”