Last year there was no Black Friday in Chicago.  A policeman had fired 16 shots to kill a 17-year-old African American man a year ago, but the video surfaced only after 400 days. In November as well, three people were killed at a Planned Parenthood facility in Colorado Springs. In Mali, two men held 170 people hostage and killed 20 of them; the siege ended when commandos stormed the hotel, freed the hostages, and killed the attackers.  And, in Paris, 130 died because of a terrorist attack.

We live our lives in a time such as this.  Planes are being shot down.  And we hear from the presidential candidates messages of doom and gloom.  The safety of the world, and particularly the United States, is in jeopardy.  In the political arena, especially from the presidential candidates, we hear no encouraging words. Building a wall around our country won’t cut it.  The increased police presence at New York’s Port Authority bus terminal and Times Square confirms we live in fear.  A republic of dreams is gradually turning to a republic of fear.

People ask whether there is any hope at all. There are very many of us who are busy trying to forget the grim situation around us making ourselves busy traveling back 2,000 years to that manger in Bethlehem – singing Christmas carols, giving each other gifts, preparing delicious dinners, and decorating our homes and Christmas trees.

In the midst of hopelessness, we are here to understand what hope means.

Our Scripture readings do not point us to Bethlehem or a manger.   They point us to the future.  They are helping us to a time when love will prevail and love alone will give us hope in our hopeless situation. The Apostle Paul speaks of love abounding and he thinks it is urgent because Christ is coming.  The psychologist, Eric Fromm, would say that “Love is the only sane and satisfactory answer to the problem of human existence.”  Then we can better sing the song “Love Makes the World Go ‘Round.”

The actor, Peter Ustinov, did a great job describing what true love is, hinting at the character of God’s love:  “Love is an endless act of forgiveness, a tender look, which becomes a habit.”  Real love, God’s love is endless forgiveness.

With this sort of love, the future is not so uncertain.  We can face it with confidence.  Famed theologian Jurgen Moltmann makes that clear in a comment which nicely illuminates the Christmas hope: “As a result of this hope in God’s future, this present world becomes free in believing from all attempts at self-redemption and becomes open for loving and ministering to each other.”

Let me narrate the lives of two people to illustrate this, based both on Anand Giridharadas’s book, The True American: Murder and Mercy in Texas, and his TED talk.

It’s September 21, 2001, ten days after the worst attack on America since Pearl Harbor. Everyone wonders about the next plane. People are looking for scapegoats. The President, the night before, pledges to “bring our enemies to justice or bring justice to our enemies.”

And in a Dallas mini-mart, surrounded by tire shops and strip joints, a Bangladeshi immigrant works the register. Back home, Raisuddin Bhuiyan was a big man, a Bangladeshi Air Force officer. But he dreamed of a fresh start in America. If he had to work briefly in a mini-mart to save up for IT classes and his wedding in two months, so be it.

Then, on September 21, a tattooed man enters the mini-mart, holding a shotgun. Raisuddin knows the drill: he puts cash on the counter. This time, the man doesn’t touch the money. “Where are you from?” he asks. “Excuse me?” Raisuddin answers. His accent betrays him. The tattooed man, a self-styled true American vigilante, shoots Raisuddin in revenge for 9/11. Raisuddin feels millions of bees stinging his face. In fact, dozens of scalding, birdshot pellets puncture his head.

Behind the counter, he lays in blood. He cups a hand over his forehead to keep in the brains on which he’d gambled everything. He recites verses from the Koran, begging his God for his life. He senses he is dying.

He didn’t die. His right eye left him. His fiancée left him. His landlord, the mini-mart owner, kicked him out. Soon he was homeless and $60,000 dollars in medical debt. But Raisuddin lived.

And years later, he would ask what he could do to repay his God and become worthy of this second chance. He would come to believe, in fact, that this chance called for him to give a second chance to a man we might think deserved no chance at all.

After he was shot, Raisuddin’s life grew no easier. The day after admitting him, the hospital discharged him. His right eye was practically blind. He couldn’t speak. Metal peppered his face. But he had no insurance, so they bounced him. His family in Bangladesh begged him, “Come home.” But he told them he had a dream to see about.

He found telemarketing work, then he became an Olive Garden waiter. Now, as a devout Muslim, he refused alcohol. Then he learned that not selling it would slash his pay. So he reasoned, like a budding American pragmatist, “Well, God wouldn’t want me to starve, would he?” And before long, in some months, Raisuddin was that Olive Garden’s highest grossing alcohol pusher. He found a man who taught him database administration. He got part-time IT gigs. Eventually, he landed a six-figure job at a blue chip tech company in Dallas.

From a distance, Mark Stroman, who shot him was always the spark of parties, always making girls feel pretty. Always working, no matter what drugs or fights he’d had the night before. But he’d always wrestled with demons. He entered the world through the three gateways that doom so many young American men: bad parents, bad schools, bad prisons. His mother told him, regretfully, as a boy that she’d been just $50 short of aborting him.

Sometimes, that little boy would be at school, he’d suddenly pull a knife on his fellow classmates. Sometimes that same little boy would be at his grandparents’, tenderly feeding horses. He was getting arrested before he shaved, first juvenile, then prison. He became a casual white supremacist and, like so many around him, a drug-addled and absent father. And then, before long, he found himself on death row, for in his 2001 counter-jihad, he had shot not one mini-mart clerk, but three. Only Raisuddin survived.

You see, late in 2009, eight years after that shooting, Raisuddin had gone on his own journey, a pilgrimage to Mecca. Amid its crowds, he felt immense gratitude, but also duty. He recalled promising God, as he lay dying in 2001, that if he lived, he would serve humanity all his days. Then, he’d gotten busy relaying the bricks of a life. Now it was time to pay his debts. And he decided, upon reflection, that his method of payment would be an intervention in the cycle of vengeance between the Muslim and Western worlds. How would he intervene? By forgiving Stroman publicly in the name of Islam and its doctrine of mercy. And then suing the state of Texas and its governor, Rick Perry, to prevent them from executing Stroman.

Yet Raisuddin’s mercy was inspired not only by faith. A newly-minted American citizen, he had come to believe that Stroman was the product of a hurting America that couldn’t just be lethally injected away. This immigrant begged America to be as merciful to a native son as it had been to an adopted one. 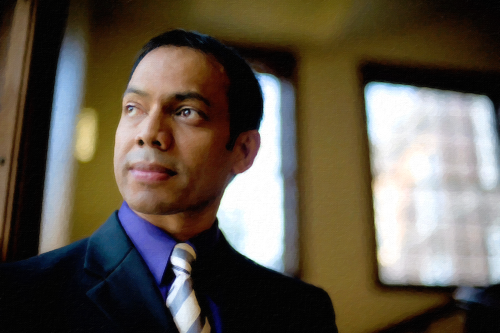 Raisuddin Bhuiyan. His non-profit website is World Without Hate.

In the mini-mart, all those years earlier, not just two men, but two Americas collided. An America that still dreams, still strives, still imagines that tomorrow can build on today, and an America that has resigned to fate, buckled under stress and chaos, lowered expectations, and ducked into the oldest of refuges: the tribal fellowship of one’s own narrow kind. And it was Raisuddin, despite being a newcomer, being attacked, and being homeless and traumatized, who belonged to that republic of dreams and Stroman who belonged to that other wounded country, despite being born with the privilege of a native white man.

On July 20, 2011, right after a sobbing Raisuddin testified in defense of Stroman’s life, Stroman was killed by lethal injection by the state he so loved. Hours earlier, when Raisuddin still thought he could save Stroman, the two men got to speak for the second time ever. Here is an excerpt from their phone call:

Raisuddin: “Mark, you should know that I am praying for God, the most compassionate and gracious. I forgive you and I do not hate you. I never hated you.”

Stroman: “You are a remarkable person. Thank you from my heart. I love you, bro.”

Even more amazingly, after the execution, Raisuddin reached out to Stroman’s eldest daughter, Amber, an ex-convict and an addict, and offered his help. “You may have lost a father,” he told her, “but you’ve gained an uncle.” He wanted her, too, to have a second chance.

Like Raisuddin, we can make pilgrimages. And there, in Baltimore and Oregon and Appalachia, find new purpose, as he did. We can immerse ourselves in that other country, bear witness to its hopes and sorrows, and, like Raisuddin, ask what we can do. What can you do?  How might we build a more merciful country?

There is a saying in rabbinic teaching that for the world to survive it must hold fast to three things: truth, justice and peace. And sadly, to none of these things have the peoples of the world ever held fast with any grip. The result is the kind of world one of our heroes of the past describes, which sounds strangely like the world Jesus described: “The world has achieved brilliance without conscience. Ours is a world of nuclear giants and ethical infants. We know more about war than we know about peace, more about killing than we know about living.” And no, those profound words are not mine. They were spoken in 1948 by General Omar Bradley when the prospects for humanity were bleak and hopeless. Nothing much has changed.

However, hope and expectation can change everything. Love coupled with forgiveness can certainly birth hope in us. Unless you believe “there is hope,” you are hopeless! Unless you say “There must be something more,” you’re living something less than life.♦

The Rev. Dr. Jacob David is Director of Field Education and Assistant Professor of Ministerial Studies and Homiletics at UTS. This article is adapted from his Advent Sunday sermon given November 29, 2015 at St. David’s Episcopal Church, Cranbury, NJ.

3 thoughts on “A Second Chance: Love with Forgiveness”