A Principled Approach to Tackling Inequality 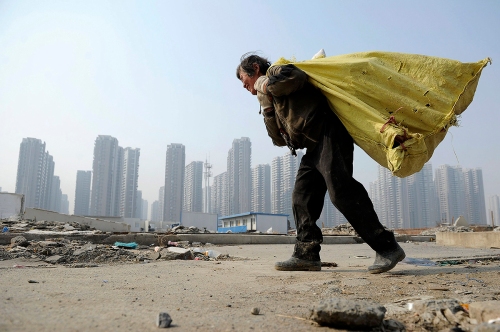 Income inequality has come to the fore as the most pressing economic and social issue facing the world today. According to Credit Suisse’s Global Wealth Report 2013, 0.7% of the world’s inhabitants possess 41% of its wealth, 10% have 86%, and the poorest 50% hold a mere 1%.

A new book by French economist Thomas Picketty, Capital in the Twenty-First Century, has topped the bestseller lists. Picketty’s central thesis, supported by a wealth of historical data, is that over time the relative gains to owners of capital in peacetime economies are significantly higher than the returns to labor. His book proves beyond doubt what everyone has long known – the richer get richer while the poor get poorer, at least in relative terms. Pope Francis tweeted in April that “Inequality is the root of social evil.” Christine Lagarde, the head of the IMF, recently added her voice to the debate, warning that rising inequality threatens global financial stability, democracy and human rights.

While all may agree that inequality can tear nations apart, there is no consensus on the solution. Policy proposals to reverse inequality center upon taxation and redistributive measures. These are inevitably contentious. When owners of wealth, who came by their riches honestly, legitimately and, in their opinion, deservedly, are forcibly dispossessed through taxation or government fiat, resentment arises. If those same governments then expend the proceeds wastefully or corruptly, this resentment only deepens.

But there is another approach. It requires a basic understanding of economics and the application of some principled thinking.

The starting point of economics is scarcity. With scarcity comes the need to make choices. The economic cake is not infinite in size and there are a lot of hungry mouths to feed. The two perennial questions nations seek to address are how best to make the cake bigger and how to divide it up.

The first question falls primarily in the realm of economics which casts itself as a “normative science.” It does not seek to be prescriptive, but merely to say, “With this set of economic relations and knowing what we do about human behavior, then such-and-such a policy is likely to result in such-and-such an outcome.” The second question takes us into the realms of politics, ethics and beyond.

A fundamental tenet of economics is that everyone acts out of self-interest. Some may contest this, arguing that there are people who live truly altruistic lives with no attachment to worldly possessions. However, such an argument fails to recognize that self-interest differs from person to person. This point was made succinctly by a Buddhist monk who quipped: “We monks are the greediest people on earth. Not content with storing up riches in this world we want them in the next one instead.” From such a perspective, the economic choices of a wandering dervish are as rational as those of a rich miser who refuses to give a cent to charity.

Unificationism extols the goal of true love. Through love, one’s consciousness of self is expanded to include the other. The Buddhist concept of compassion expresses a similar notion. Regardless of how much or how little we are able to actualize love or compassion, the very inkling of its existence can suffice to modify our behavior. It would be hard to conceive of a person with any spark of humanity who could sit in an expensive restaurant and enjoy a lavish meal if a starving beggar stood outside the window watching every mouthful. In rich nations in particular, many of us are able to make the economic choices we do only because we are relatively isolated from the suffering of others.

Over the past 70 years, empirical studies have convinced leaders of nations of the importance of capital formation, technology, and investment in the health and education of their people – so-called “human capital.” Yet, until now, little or no investment has gone into improving the “spiritual capital” of a nation. The reasons are clear. First, levels of health and education are relatively easy to measure empirically; the spiritual level of a society is not. Second, political leaders and academics are often wary about crossing a line that is primarily seen as the preserve of religion or philosophy. Nonetheless, a Nobel Prize surely awaits the first economist to empirically demonstrate that investment in a nation’s “spiritual capital” will raise the welfare of its citizens. The starting point for such an analysis might be the identification of proxy variables to measure the degree of responsibility individuals feel towards others within their family, clan, society, nation and the world.

Even if a credible measure of the spiritual capital of a society can be found, how might a secular government go about raising its level? The answer lies in education and in particular ensuring that, from an early age, all citizens recognize and accept three fundamental precepts of human life:

These precepts, while seemingly idealistic, resonate with the original mind of all human beings. If internalized by individuals throughout society, they will have profound implications on our economic relations.

Consider two college graduates of equal ability. One chooses to work in an investment bank calculating bond yields and the other works for NASA. The difference between their annual earnings may be huge. Economists call this difference “economic rent” — the surplus accruing to land, labor or capital above the amount earned in its next most rewarding employment.

Now, consider opera singers, composers, writers, and painters. While they may want to be paid well for what they do, true artists are not primarily motivated by monetary reward, but from the satisfaction they derive from both the creative process itself and the joy they bring to others. Should not the same premise apply to all who follow their calling and apply themselves to valuable occupations to which they are well-suited, including entrepreneurship, financial engineering, law and other professions? If so, responsible citizens earning substantial amounts of economic rent might well be expected to share a portion of their good fortune with the rest of society.

“No man is an island entire of itself, every man is a piece of the continent, a part of the main… any man’s death diminishes me, because I am involved in mankind. And therefore never send to know for whom the bell tolls; it tolls for thee.”

If we could become truly aware of our interconnectedness, then the inclination to ease the suffering of our fellow man would become an operating imperative and not just a philosophical concept in our lives. Despite growing inequality, this is already happening to some degree in many countries. There are a plethora of charitable causes vying for our money. Philanthropy enables great industrialists and entrepreneurs to ensure the durability of their name, long after they have passed into the next world. Today, Bill and Melinda Gates are working assiduously to erase disease in Africa. Meanwhile, Bill Gates and Warren Buffett have enrolled 122 fellow billionaires to pledge to give away half their wealth before they die (significantly, none of these are yet Chinese, although China boasts 358 billionaires – one-fifth the global total).

Land and minerals are assets which man has had no hand in creating. To regard these as the common heritage of mankind is entirely justifiable and has far-reaching economic implications.

Clearly some sense of continuity of possession is needed if people are to be motivated to build buildings, plant orchards, grow crops, or dig mines. Those same people need be able to receive appropriate recompense for their investment in fixed assets and the development of land if it changes hands. But should anyone be given ownership of the land in perpetuity? If the land were to belong to the nation as a whole and people were to pay a usage charge to occupy and exploit it, the revenues thus generated would be sufficient to replace all other taxes. Further, such an arrangement would prevent highly desirable land being accumulated for speculative purposes but left undeveloped. Enterprising individuals would be rewarded for their investment of labor and capital. Productivity would rise. In short, the whole society would benefit and today’s inequalities would be greatly diminished.

Such ideas were proposed by the political economist Henry George in his book Progress and Poverty in 1879 and have since found favor with leaders as ideologically diverse as Winston Churchill and Sun Yat-sen. Perhaps the time for their implementation is nigh.

Graham Simon met the Unification Movement in California in 1981. He holds an MA in Economics from New York University and has lived in the UK, Southeast Asia, the USA and Japan, working extensively for international corporations. He and his family now live in London, where he runs a software company and is a trustee of the FFWPU-UK charity.

18 thoughts on “A Principled Approach to Tackling Inequality”