Rev. Sun Myung Moon has always maintained that truly the greatest revolution in the world is the one from selfishness to unselfishness.  Likewise, nearly every spiritual teaching has always dealt with the idea of transcending the self and being one with the universe.  From Buddha, Lao Tse and Jesus, to Eckhart Tolle, Byron Katie, and many of today’s modern writers, all have focused on this critical point. In modern psychology, Sigmund Freud and Carl Jung also wrote of the importance of the self-centered ego in explaining our everyday actions.

Jesus taught it is better to give than to receive, but for most of us, this is little more than a nice phrase to quote—one that everyone agrees with, but few try to observe.  Some spiritual disciplines even equate our condition to having a raisin heart—one all scrunched up but with minimum capacity to give and receive love.  After we marry and start having children, it finally becomes opens up, when we actually experience more joy watching our children open their Christmas presents than our own.

In our lifetimes we develop the amazing ability of justifying whatever we think, act or feel.  There is always a reason for how we behave and that reason can always be justified, explained and rationalized.  The one thing that these aspects have in common is they are all justified from our self-centered perspective.

Today, many of us spend much time behind the wheel of our cars.  We look out at the road and view much of what everyone else as doing wrong.  Driving too fast or too slow, changing lanes improperly and in today’s world, doing some other activity other than steering the car: talking on our cell phone, texting, eating, and many others.  Yet, few of us ever take the time to criticize our own behavior, which from our self-centered perspective is almost always correct.

When we argue with our spouses, our children, our bosses, or our co-workers, we think we are always right.  When we argue politics, sports or nutrition, again, we think that we are always right. Why would anyone ever put forth a fallible argument — that would be a sure sign of mental imbalance.  It is truly a rare occasion for one to put his head in his hands and repent in tears for such stupid behavior.  It’s usually only years later, after some deep insight, that we realize maybe we were not correct after all.

Since we have but two physical eyes and one physical mind, we do look at the world from our own point of view.  Rev. Moon once told us that we arrive at our greatest moments somewhere in our 50s or 60s.  At this age, we can collect the wisdom from our mistakes, combine it with the lessons we have learned in life and still have the vigor, strength and maturity to act in a healthy way.

Bob Dylan, the revolutionary poet and musician from the ‘60s, was recently quoted in Time magazine as saying how sad it is that in today’s world, no one even looks at their fellow travelers through life as they walk down the street.  I noticed that while walking downtown the only people I ever see smiling or laughing are those on their cell phones, talking to someone invisible to the passersby. And it would be so easy to find some fault in everyone who passes us by.

Whether it be divorce between a couple, a war between neighboring countries or a feud between the Hatfields and the McCoys — most conflicts come between folks that know and are close to one another.  Again, so much of this can be simply broken down into selfish behavior.  What is good for me is good for me.  My desire in life certainly precludes your needs.

Thus, Rev. Moon notes that the most serious problems are usually between those very close to one another.  Whether it be brothers in the same family, neighbors on the same block, or on a national level, countries like North and South Korea; Northern Ireland and Ireland; neighboring countries in Europe, Asia or the Americas.  Even within religious denominations, there is often serious conflict, many times resulting in a permanent splitting of the denomination.  Hatred and prejudice likewise are often caused because people don’t like people who look different, talk differently, dress differently or even eat different kinds of food.  People have a history of hating people who look, speak or culturally behave different from themselves.  I believe most prejudice is caused by people’s fear of something different.

One incredibly important area where selfishness rears its ugly head is during lovemaking. When you are making love with your partner is it still all about you or about them?  This may be the most critical time of all for selflessness.  Our TV airwaves are flooded with ads for the new pills that guarantee a man a great sexual experience.  But is one’s performance what it’s all about?  As young husbands, most males may well be concerned about their performance.  But again, as Rev Moon has already stated, as one matures, you begin to realize that you are not having sex or making love to someone, but rather you are delving into the incredible situation of melding your spirits and experiencing love together. 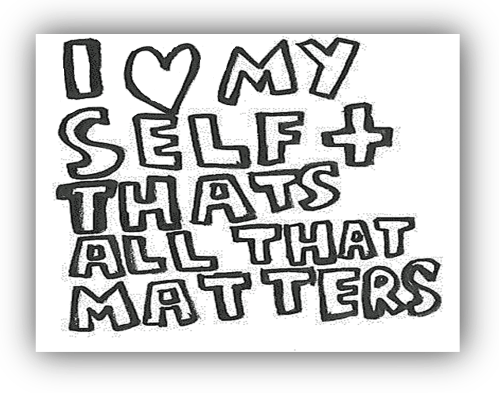 Jesus says in Matthew 7:3-5, “Why do you look at the speck of sawdust in your brother’s eye and pay no attention to the plank in your own eye? How can you say to your brother, ‘Let me take the speck out of your eye,’ when all the time there is a plank in your own eye? You hypocrite, first take the plank out of your own eye, and then you will see clearly to remove the speck from your brother’s eye.”  Likewise, a familiar proverb says that when you point one finger at someone else, your other three fingers are pointing back at you.

Modern psychology notes that it is usually your own hang-ups that cause you to notice something wrong with someone else.  Why does someone’s particular behavior bother you so much, while you don’t even pay the slightest attention to something else ?

Even with all the opposition to marriage equality, the heterosexual and religious right is rendered powerless because the incidents of divorce surely outweigh the merits of successful marriages. So it’s just the pot calling the kettle black.  Is a broken heterosexual marriage better than a long- standing gay alliance?  And what is better for the children—a committed homosexual couple that adopts or a heterosexual couple that commits adultery or divorces?  The argument is that every child needs both a mother and a father—but what if that mother and father cannot fulfill their proper role and covenant as husband and wife?

I must concur with Jesus and Rev. Moon.  It is much harder to get a selfish man to let go of his selfishness than to have a camel go through the eye of a needle.  The revolutions that our Founding Fathers, Lenin, Stalin, Mao, Ho Chi Minh, Fidel Castro or Che Guevara and others led were in many ways far easier than getting one individual to give up his self-centered lifestyle.

7 thoughts on “Selfishness: The Greatest Challenge of the 21st Century”