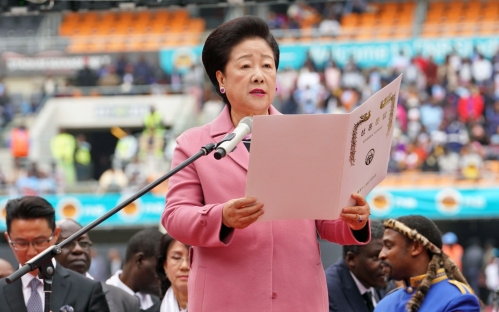 Since August 2014, Hak Ja Han Moon, the widowed spouse of Rev. Sun Myung Moon whom FFWPU members call True Mother, has been proclaiming herself “the only begotten Daughter.”

First is the matter of disabusing Christians that Mother is not equating herself with God. This is because Christians understand the scriptural title “only-begotten Son” to mean that Jesus is God. Consider the Nicene Creed:

I believe in one Lord Jesus Christ, the Only Begotten Son of God, born of the Father before all ages. God from God, Light from Light, true God from true God, begotten, not made, consubstantial with the Father…

Jesus was “begotten,” not at his human birth but “before all ages.” It means he is of God’s very substance (consubstantial), “God from God.” He is made of God-stuff, not mortal flesh and bone.

However, “only begotten Son” in Unificationism means something very different. First and foremost, Jesus is a human being.