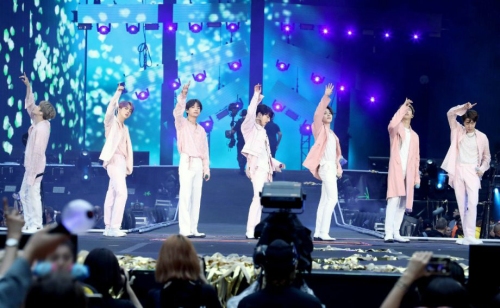 Recently, a Korean boy band hit the world stage and many of the youth generation have fallen in love with them. They’ve become so famous that even this band of seven boys was surprised to see the global level of reaction to their performances, far more than they anticipated.

The band is BTS. Their name comes from the English acronym of 방탄소년단 or BangTan Sonyeondan, literally “Bulletproof Boy Scouts” in Korean. They won the Billboard Music Awards for Top Social Artist for the past three years. They are almost like the Second Coming of the Beatles, at least for our present generation of young people.

This year, at least 100,000 fans in each city they toured turned out. In particular, they filled Wembley Stadium where Queen performed live in 1985. Their fans have created a kingdom-like quasi-religion of their own. On the Internet, such as YouTube, the band’s fan club is called the ARMY.

Fans are especially amazed by the dramatic growth of the band. Their production company was not one of the three major companies in South Korea. As they sang in “Silver Spoon/Baepsae,” there used to be a golden rule in the South Korean entertainment industry: a band should be promoted by one of the top three K-Pop companies to gain global popularity. But, BTS started at the bottom. And none of the seven boys was from the capital, Seoul.

They were initially ignored after their debut because their music was totally different from prevailing trends. But because of that ignorance they went on to win the Billboard award, as sung in “DDaeng.” The boys show their fans a humble attitude while singing “I Need U,” “Best of Me” and “Illegal/Dimple.” And they recently released the song, “Boy With Luv,” dedicated to their fans.