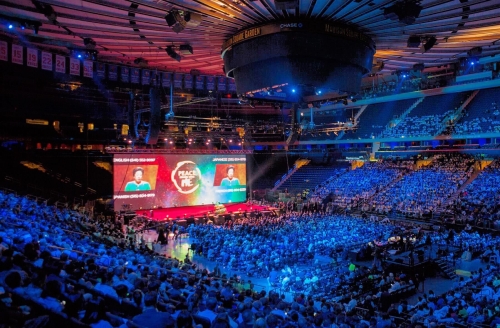 Mother Moon (Mrs. Hak Ja Han Moon) wants tribal messiah work in America to give millions of people access to God’s love through the Holy Blessing so they can practice “living for the sake of others” and usher in a new era of peace and security for all citizens. It’s a beautiful aspiration filled with expectant hopes and dreams.

The challenge to this ambition is few people know anything about us, and we are a group with limited financial resources. Our relatively small American movement has few resources to effectively tackle a multitude of serious social ills.

In this article, I explore how — after 40 plus years of unrelenting, sacrificial work by thousands of members and billions of dollars invested to “bring America back to God” — our movement has yet to emerge as a leader in transforming American culture.

I then look at how we might alter this situation and more effectively integrate Unification ideals into the fabric of American society.

I do not criticize any individual, institution or leadership, but prescribe next steps so we make good on our promise to transform American culture through Unification ideals.

Since the passing in 2012 of our founder, Rev. Sun Myung Moon (Father Moon), our movement is in a period of reevaluation and self-correction.  From our IPEC 7-day National Divine Principle Revival Workshops, to the “God’s Hope for America: Remembered, Revived, Reimagined” bus tours, to the “miracle of the Madison Square Garden event” and our recently renewed “Blessing Movement” and tribal messiahship initiatives, we earnestly try to “get our message out,” hoping to influence people’s minds and hearts to embrace our worldview and religious teachings.  Our ongoing efforts to impact American culture come on the heels of some unthinkable internal setbacks.

Hundreds of our young adults experienced great shock and disappointed in 2012 when In-jin Moon, then president of our American movement and Lovin’ Life Ministries, abruptly resigned from her positions when it became known she had carried on an extramarital affair and secretly bore a child.

END_OF_DOCUMENT_TOKEN_TO_BE_REPLACED 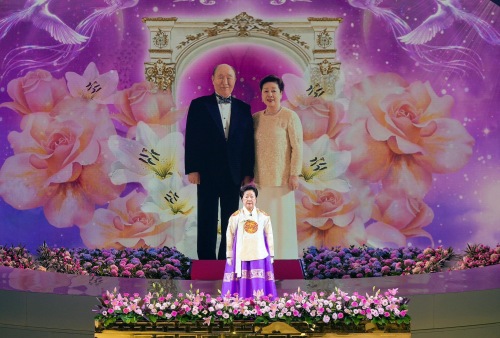 This article discusses Mrs. Hak-ja Han Moon’s effort to assert her leadership and put her particular stamp on the Unification movement. Known as “True Mother,” she is emerging as an institution builder. If one likens Rev. Sun Myung Moon to Joseph Smith, then Mrs. Moon can be viewed as the movement’s Brigham Young.

She has faced opposition, because while both Rev. and Mrs. Moon have the theological status of True Parents, in practice members of the Unification Church made Rev. Moon, whom they regard as the Lord of the Second Advent, the focus of their devotion. There had been little reckoning with the prospect of his passing and how they would regard the leadership of his widow, who today is the remaining True Parent on earth.

The Question of Succession

At the time of Rev. Moon’s death in 2012, many members expected Mrs. Moon would merely lead from behind while training a designated male heir to take over leadership of the movement. Rev. Moon had made the issue of finding a suitable heir a matter of serious concern during the previous decade. But those efforts were unsuccessful.

The eldest son, Hyo-jin Moon, declined the position due to past overindulgence, which contributed to his early death from heart failure in 2008. Ironically, because he returned repentant as a prodigal son, he now occupies a place of honor among the True Children. The next living male heir, Hyun-jin (Preston) Moon had been widely regarded as the heir apparent, but that same year Rev. Moon appointed his youngest son, Hyung-jin (Sean) Moon, as president of FFWPU, and at a ceremony in January 2009 he and his wife stood behind Rev. and Mrs. Moon wearing crowns. The following year, Hyun-jin broke from the Family Federation to form a rival organization. Hyung-jin continued as president until early 2013, when he had a falling out with his mother and moved to Pennsylvania to set up a rival church.

Thus, while few members of FFWPU anticipated that Mrs. Moon would take the reins of leadership for an extended period of time, after the sons who were designated as heirs refused to work with her, most members gravitated to her. They were willing to accept True Mother’s authority after her husband’s passing because it fit with the church’s core teaching that Rev. and Mrs. Moon stand side-by-side in the capacity of True Parents.

END_OF_DOCUMENT_TOKEN_TO_BE_REPLACED

The last week of July was a horrible week in the political arena in our country.  The conversations that took place between some of the highest officials of our country and members of the press simply cannot be repeated to our children as the language and words used in communication left much to be desired.  I have seen plenty of animosity and hatred in the past.  But I have not heard such obscene and unacceptable language used at the highest level of the political hierarchy.

And now, we are here in this sanctuary to worship a Holy and Righteous God.  We come from such a chaotic world and we see ourselves worshipping and listening to the holy word and singing and praising a holy and loving God.  Here in this sanctuary we do have a glimpse of the Kingdom of God.  People from East and West, North and South, come together at this heavenly banquet.  And what we do here has profound significance and there is beauty in what we do.

This is deeply profound.

And here is where I find this beauty generated in the midst of chaos. Remember, Jesus was born also in a chaotic world at a time when there was so much political upheaval, movement, and migration of peoples around the world. He himself was part of a family that was moving – in that sense of the word, unsettled. He came into this world in that context.  Yet, at Christmas time, we celebrate the beauty of his coming into the world.

So, I like to think of this beauty that Jesus embodies as a collateral beauty, where there is a sense of beauty that is coming out of unexpected places, in the midst of events that were pretty chaotic.

In today’s Gospel lesson, Jesus talks about the Kingdom of God as a search for fine pearls, on finding one pearl of great value, and a merchant goes and sells all that he had to buy it.  A pearl is a thing of beauty (Matt. 13:45-46). It is fascinating how oysters make pearls.

Unlike diamonds and other gems, as well as gold, a pearl is the product of a living creature. It is also the result of suffering. Down in the depths of the ocean there lives a little animal encased in a shell; we call it an oyster. One day a foreign substance, a grain of sand, intrudes, and pierces its side.

END_OF_DOCUMENT_TOKEN_TO_BE_REPLACED

Most of us born in this era tend to take our advantages for granted. However the time of the Messiah living on earth is the shortest but most precious time period, especially compared to the providential time periods of previous ages. Studying history can be a valuable asset to learn and understand what privileged position we are in today.

Moreover, the contents of Divine Principle explain the purpose of life in great detail so that agony over fate, as seen in history, can be a relic of the past.

Contemporary science and comfortable living environments, though many are caught up by them, cannot compare with these deep contents.

Great chess players always study the historical masters in order to learn the art of playing at the highest level. So too can we Unificationists improve our attitude in this age if we study the lives of those who longed and lived for Christ in their ages.

In this article, I discuss two eras as well as two important leaders of their times.

The Era of Resemblance

A young mother approached a group of Roman soldiers, her clothes in disarray while she dragged her child along. She asked the whereabouts of the group of Christians that were to meet outside the city walls of Edessa. The prefect of the city, after criticizing her strange clothing, asked her if she did not know that they were about to search for and kill them. Her reply was this was the reason for her rush; she only was worried about coming late. When the prefect asked why she brought her child along, she answered: “It is that my child will participate in the martyrdom for God, suffer and receive the same reward as we will.”

According to the church historian Sozomenus, Eastern Roman Emperor Valens (364-378) had given a directive to punish those who came together for such meetings after he had spotted a gathering on his visit to the city the day before. He gave the order to prefect Modestus to intervene. He, in turn, sent out word about his intention of the next day’s hunt outside the city walls, intending to warn Christians so they would cancel their meeting.