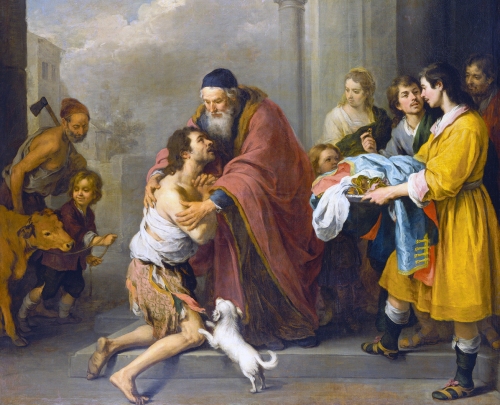 In the “Cain children” vs. “Abel children” dichotomy, I’m of a mind that the primary category is “children.” Looking at Cain and Abel, the parents would say: “These are all my children. Some are older, some younger, some look more like me, some less, but we are one family and they all receive my inheritance.” Thus I apply the family paradigm from the parents’ viewpoint, rather than as we usually do, from a sibling (rivalry) point of view. I’m also of a mind to bring out the virtues and responsibilities of Cain more than usual.

The parable of the prodigal son (Luke 15:11-32) is instructive. Here, Abel took the inheritance, abandoned his father and wasted it in a self-centered life. But the spark of God within him woke him up; he realized his abject status as a sinner and returned to his father, ready to be a servant of servants. Based on this condition, the father bestowed blessings upon him. On the other hand, Cain served his father faithfully, building up the father’s fortune. He did not share the father’s willingness to bless Abel. But the father reached out to him and told him that all that was the father’s belonged to him and encouraged him to rejoice.

This reminds me of our relationship with True Parents over the years. We Cain children worked so hard, fundraising, witnessing, teaching, sleeping little, having nothing. We in New York would rise well before dawn on Sunday mornings to attend True Father’s sermons at Belvedere, only to get chastised for being sinners. I would think to myself, “But Father, we’re your children who are here attending you! What about those who didn’t even come here?” In the back of my mind was, “Father, you should be praising us, and chastising those who didn’t come.”