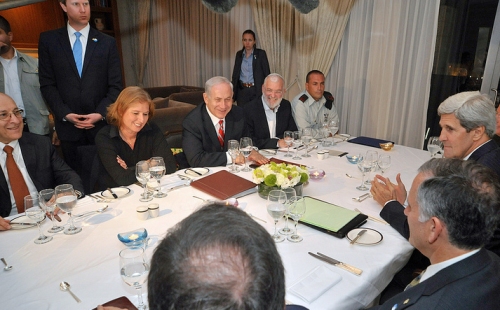 These days Israeli Prime Minister Benjamin Netanyahu is a man caught in the middle. He seems to have come around to the understanding that peace with the Palestinians is a necessity to preserve Israel’s future as a Jewish and democratic state. Yet he is beholden to members of his own Likud party, which includes rightists like Deputy Defense Minister Danny Danon. Danon recently stated on Israeli TV that there would never be a Palestinian state and the Palestinians would be governed by Jordan. Since Netanyahu apparently cannot find enough support for peace negotiations from his own base, if he truly wishes for peace, he has no choice but to reach across the aisle.

Netanyahu governs in a coalition with centrists like Justice Minister Tzipi Livni, an advocate of negotiations, and Finance Minister Yair Lapid, whose party’s surge in the polls early this year came at Likud’s expense. Lapid sees peace with the Palestinians as a desideratum for Israel’s economic future. Yet his coalition also includes Economics Minister Naftali Bennett, whose settler movement seeks permanent Israeli sovereignty over the entire West Bank. In June, he told a settlers group that the idea of a Palestinian state had reached a “dead end.”

And then there is the feisty right wing of Likud led by Danon. At a party nominating convention in May 2012, he organized a group of pro-settler Likud stalwarts to challenge Netanyahu and nearly deprived him of leadership of his own party. Netanyahu was forced to scramble back, which led to his short-lived alliance with Kadima Party leader Shaul Mofaz. Early this month, hardliners gained control of the Likud party. Netanyahu now has to govern with this fragile coalition, making domestic politics an ever-present problem. It goes a long way to explaining his recalcitrance, despite U.S. Secretary of State John Kerry’s five visits to the region since taking office to jumpstart peace talks.

Netanyahu needs to reach across the aisle, to politicians like Shelly Yacimovich, leader of the Labor Party which won 15 seats in January’s election. She is a strong advocate of peace talks, and two months ago met Palestinian President Mahmoud Abbas in Ramallah and told him it is necessary to start peace talks immediately.

This is the nub of the argument I presented in a blog post last month on the website of the World Policy Institute. It is a strictly political argument; what, then, does it have to do with applied Unificationism?