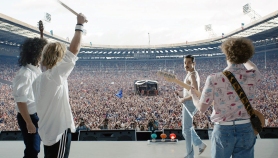 “Bohemian Rhapsody” — the all-time highest-grossing music biographical film in just two months since release, a huge success in Korea, and a 2019 Oscar nominee for Best Picture — has prompted me as a Unificationist to reflect on the life of singer-songwriter Freddie Mercury (1946-91).

Directed by Bryan Singer, the movie focuses on a critical period of Mercury’s life, 1970-85 (portrayed on screen by Rami Malek). We watch movies with various glasses, and among Unificationists, each of us may see “Bohemian Rhapsody” very differently.

Rather than comment in the light of the Principle, I focus in this review on a few themes from the biopic to shed light on several aspects of our teaching.

The film, for example, depicts an artist imitating the three blessings, then trying to separate from his antichrist demons. In a sense, “Bohemian Rhapsody” features Adam, Eve and the Archangel in a garden. Their behavior is quite reminiscent of our teaching on the Fall, but reveals other dimensions of sexual disorder than the typical kind of adultery. The movie helps us understand what kingship and a coronation entail.

This film also causes us to reflect on notions such as symbol, image and substance. It helps us understand the path to becoming a false idol, to becoming an iconic figure, and leaves the door open to the path of substantializing true love.

Creation, fall and redemption of an idol

“Bohemian Rhapsody” depicts the growth and ascension of one of the greatest voices in rock music (the Rock God, according to Britain’s OnePoll), and how the stage persona of Freddie Mercury was created gradually, mostly by himself, so that he became idolized by millions. In this ascent, Mercury was driven by the power of an absolute narcissism, which brought him to the summit.

We then see his spiritual and physical fall, and descent into hell. The narcissistic idol is transformed into a puppet driven into hell by sexual passion, until a ridiculous man is disguised as a king enjoying evil joy in the kingdom of loneliness.

The film ends with the consequences of his physical fall and early steps toward what can be seen as a form of human redemption. The person who has suffered so much because of sin begins the suffering course of redeeming his mistakes.

END_OF_DOCUMENT_TOKEN_TO_BE_REPLACED

At an October meeting in South Korea, the working group of the UN’s Intergovernmental Panel on Climate Change (IPCC) issued a revised report on the Paris Climate Agreement. It makes new forecasts, based upon new data assuming average world temperature rises 1.5 degrees C. compared to 2.0 degrees.

In my earlier article on this blog, “Climate Change: Rethinking the Debate,” I argued that only using one metric was insufficient and proposed others. This article considers the implications of the new IPCC proposals to help people understand them and offer some new thoughts and solutions. It is meant to complement Dr. J. Andrew Combs’ article last week on this site.

Conveying large and complex concepts and data that include probabilities can paralyze the general public. People confuse these with predictions like the weather forecasts they use everyday to plan their commutes to work and daily life. Probabilities with degrees of confidence do not mobilize people to act. Why is this?

Two cognitive biases come into play for both ardent believers in climate change and those who think it is a hoax.

The first is anchoring, the tendency to rely too heavily, or “anchor,” on one trait or piece of information when making decisions (usually the first piece of information acquired on that subject). We tend to incorporate how we see an issue in its most simple explanation. This is as true for “deniers” as for “believers.” These labels by themselves say a lot about the veracity of this bias.

Those who doubt humankind’s role in climate change also show another bias: the ambiguity effect, the tendency to avoid options for which missing information makes the probability seem unknown. Very simply, complex probabilities that form the basis for assessing climate change seem fantastic and unrealistic for many.

Everyone is comfortable with predictions in weather, economics and elections to some degree. We accept that, within a margin of error, we are able to order our lives and make decisions. Probabilities, especially when they involve large sets of data, the climate, world GDP, exchange rates, and elections set for a time in the future, can be easily discounted.

END_OF_DOCUMENT_TOKEN_TO_BE_REPLACED 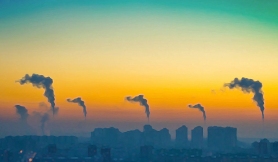 The climate change debate should be a scientific discussion, but it has become more of a political one. The political discourse, along with the money it can bring to grant funding, has infected the scientific community and its objectivity. This makes what is already a complex scientific problem a difficult sociological one.

If science seeks to advise politicians, it must be objective; but objectivity has been to an extent lost, especially among scientific leadership. We must be able to sort out the politics and misinformation from the truth and correct information if we are to make good decisions as a society going forward.

The camps.The basic debate is between two polarized advocacy camps: the “human-made global warming” camp and the “skeptics” camp. The human-made global warming camp asserts our climate is warming due to excessive pollution of our atmosphere with greenhouse gases like carbon dioxide (CO2) from our dependence upon fossil fuels. And warming is producing sea-level rise and changes in weather patterns that will yield negative, damaging results.

The “skeptics” claim that while there may be warming, it is most likely caused by natural cycles. A key difference is the human-made global warming camp insists on action such as global taxation (e.g., carbon credits) to control greenhouse gas emissions, while the skeptics say our actions are not only ineffective in changing nature, but unfair, as it is poor nations who want cheap energy (e.g., coal burning) to gain wealth and prosperity and advance into the league of advanced industrialized nations.

The increasing polarization of the camps into extreme views — “alarmist” claims of cascading catastrophes (such as offered by a recent U.S. government report) vs. outright “denial” of the human-made global warming hypothesis some skeptics hold to (like radio host Michael Savage) — is unhelpful. So are false assertions that conflate weather with climate, or that justify any unusual event as due to “climate change;”  these attitudes inevitably lead to irresponsible governance.

Just look at California governor Jerry Brown, who laid blame for the recent terrible forest fires in California to “climate change” while many others saw such fires coming due to the buildup of pine and other natural fuels (e.g., the former fire chief of Paradise, who quit a year before the “Camp Fire” because of these dangers that local and state authorities refused to address).

END_OF_DOCUMENT_TOKEN_TO_BE_REPLACED

Should we be guided by our conscience or obey authority? Should one be loyal to the leader or be honest and straightforward? Both? Such questions have troubled human beings since antiquity.

Unificationists have at times been asked if they would obey the Founders without question with queries such as: “Would you do anything Rev. Moon asks of you?” or “Do you believe Reverend and Mrs. Moon are infallible?” After all, “absolute obedience” is a term found in the pledge regularly recited by Unificationists.

Recently, an article on this site by Dr. Michael Mickler discussing a Unificationist position on birth control referenced the 1968 papal encyclical entitled Humanae Vitae and its impact on the Roman Catholic world. As is widely known, Roman Catholics generally do not strictly follow church teachings on birth control and other matters.

Mickler’s article also demonstrated that Unificationists also apply church teachings differently on a variety of issues, including birth control. It can further be assumed that given the international nature of Unificationism, responses to authority vary depending on culture, ethnicity, upbringing, and a variety of other factors.

Regardless of theological differences, it may be helpful to study how Roman Catholics relate to papal statements on matters of faith. This article briefly explores the dogma of infallibility and how it is viewed within Catholicism, and offers some reflections in the hope of stimulating discussion about Unificationism’s relationship to conscience, culture and authority.

It has been almost 150 years since the dogma of papal infallibility was proclaimed on July 18, 1870. During the final public gathering of Vatican I, a bishop received from Pope Pius IX’s hand the document defining “Papal Infallibility.” Pastor Aeternus contains the following statement that has been the subject of intense debate to this day:

“The Roman Pontiff when he speaks ex cathedra, that is, when he discharges his office as pastor and teacher of all Christians, in virtue of his supreme apostolic authority, defines a doctrine concerning faith or morals, that is to be held by the universal Church, through the Divine assistance promised him in St. Peter, exercises that infallibility with which the Divine Redeemer willed to endow his church.”

END_OF_DOCUMENT_TOKEN_TO_BE_REPLACED

This site will not tolerate the denigration, direct or indirect, of other faiths, races, minorities, and cultures. A bullying or disparaging tone directed toward AU Blog readers in a comment is not permitted.