“The Red Tent”: What the Bible Might Have Been, Had Women Written It 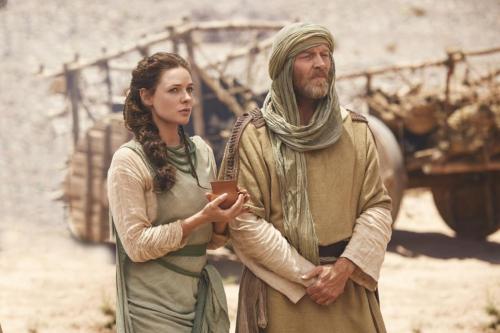 In a holiday season with a biblical blockbuster, Exodus: Gods and Kings, far more interesting from a theological perspective is the recent Lifetime Television miniseries, “The Red Tent” (video link), taken from the best-selling novel by Anita Diamant. “The Red Tent” is a retelling of the familiar stories of Jacob, his wives and children from the perspective of Dinah, Jacob’s only daughter.

The Bible knows her only through the tragic story of her “rape” at the hands of Shechem, a prince of the land. As the Bible tells it, Shechem offered to marry her, but Jacob’s sons connived to murder him and all the men of his clan as retribution for defiling Dinah’s honor. Indeed, the rape of Dinah is the premise behind several Christian “Dinah” ministries to women who have suffered abuse. But as Dinah tells her story in “The Red Tent,” she fell in love with Shechem, they married according to the customs of his people, his father then asked Jacob’s permission to approve their marriage, but what Jacob’s sons did in the name of honor — slaughtering Shechem and his people — totally devastated her heart and left her bereft. Dinah cursed Jacob and went off to Egypt, eventually found a new life there as a midwife, remarried, and attained some closure after she met Joseph there some 20 years later.

It is not difficult to grasp that the Bible was written from a male viewpoint. Hence, we might find a woman’s viewpoint, though fictional, to be intriguing. It is actually quite plausible that Dinah fell in love with Shechem; after all, he was a prince of the land and would be a good catch for a shepherd girl. For that matter, if Leah and Rachel could speak to us, how would they characterize what the Bible describes as a catty relationship as they competed for Jacob’s favor? Did they ever reconcile? “The Red Tent” reminds us that they were first of all sisters, and some of the things they did together were kept secret from their father and their husband—and hence never made it into the biblical narrative. For that matter, what was Eve thinking when the archangel tempted her? What was the nature of her inner life after the Fall?

Unificationists can relate to this issue, having recently begun to reassess the traditional notion of a patriarchal God. True Mother directed us in January 2013 to address God as Heavenly Parent, not any more as Heavenly Father, based upon the Principle viewpoint of the God of dual characteristics and the True Parents as God’s embodiment in both genders. Hence, it stands to reason that we should also reassess the words of scripture. We can recognize that because the Bible was written by men, it leaves out a part of the truth. It does not properly convey these providential women’s experiences, insights and hopes. It does not teach us much about the ways Heavenly Mother moved in the hearts of these women. Hence, it does not provide adequate models for approaching true womanhood.

It is important to recognize the extent of our ignorance about the women of the Bible. These days there is an abundance of fictional biographies of biblical women. They divide roughly into two camps. Some hew to a traditional Christian line, buying 100 percent into the Bible’s story and portraying these women as ornaments decorating God’s work with men. But a few, like “The Red Tent,” actually try to imagine a woman’s world, utilizing the best of biblical scholarship about what daily life in ancient Israel was really like.

“The Red Tent” depicts a parallel women’s society, whose center is the red tent where women stayed during their periods of ritual uncleanness, at the time of menstruation and childbirth. There the women worshipped the goddess Inanna and other deities who offered protection at childbirth — a dangerous time in a woman’s life when mortalities were frequent — and who conferred blessings of fertility and strength to womankind. What’s interesting is that this idea of a parallel “women’s religion” is backed up by biblical archaeology. Goddess figurines, called teraphim, are a frequent find in digs of ancient Israelite homes; they were a feature of household life throughout Israel’s history prior to the Babylonian exile. They coexisted with the Yahwistic religion practiced by men in the Temple, the religion that got recorded in the Bible. Archaeologist William Dever details the evidence on this matter in his 2008 book, Did God have a Wife? Archaeology and Folk Religion in Ancient Israel.

At this point, a major theological question arises concerning the attitude of the men, with their commitment to the monotheistic male God, to the women and their folk religion. The Bible records that Rachel protected the teraphim (Gen. 31:34), but later, at God’s command, Jacob had them all buried (Gen. 35:4). “The Red Tent” notices this incongruity and interprets it as Yahwistic hostility to women’s religion. Thus when Jacob entered the red tent and saw the women venerating the teraphim, he smashed them. This show of male disrespect deeply hurt the women, for whom the teraphim were goddesses of their women’s world, treasured for reasons that had nothing to do with male understandings. It was the beginning of the disruption of male-female harmony that would lead to the suffering of Jacob and his entire family, commencing with Dinah.

The women in their red tent had their own gods; apparently they had no use for the patriarchal religion of Yahweh. This is not a mere fiction; the existence of a polytheistic household religion is backed up by archaeology. But does the miniseries go too far? Nothing is seen as amiss with paganism or even the religion of Egypt; having many deities is not a problem for women, who can lean on many sources of support for life, love, childbirth, fertility, etc. There is no recognition of the abominable Canaanite practices, such as ritual prostitution, that the Bible condemns.

On the other hand, “The Red Tent” ignores the degree to which many Israelite women found succor in Yahwism, the worship of the male God, who could open infertile wombs and grant the blessings of children just as the feminine deities did. He was the God who gave Sarah a son in her old age, and it was to Him that the childless Hannah prayed for a son. According to one school of contemporary scholarship, the religion of Yahweh gradually absorbed the attributes of the pagan gods and Yahweh came to replace them as the sole God; this happened over the course of hundreds of years. Was this development providential? Or was it the result of creeping patriarchy in Israelite culture?

We are familiar with the notion that the Old Testament records the struggle to overcome paganism and establish monotheism, as a foundation of faith for the Messiah. Christians tend to lift up Jacob’s burial of the idols as righteous and condemn women’s religion as idolatrous. But is that accurate? And why is there no criticism of Rachel for protecting her family’s idols? From the viewpoint of the Principle that God is a being of dual characteristics, and that the Messiah was to come as a couple, as Jesus and his Bride, would not a better foundation for the Messiah have been one that recognized the duality of God and Goddess?

It leads one to wonder whether it would have been possible for a religion of Yahweh and Asherah, of God and Goddess, to have fulfilled God’s need to prepare a foundation for the Messiah in the midst of the surrounding paganism of the age. We Western people cannot conceive of gradations of degrees of paganism; it is all bad. In the paganism of that age, fertility was assured when god and goddess procreated; this logically required temple prostitution as the most fitting form of worship. If there was an original plan for a balanced religion of God and Goddess, it would have to be purified of its fallen qualities, especially the cult of temple prostitutes. Was that even possible? We tend to think that Israel needed to smash paganism and idolatry as a basic foundational act. One can affirm that the demise of women’s religion was a necessary evil, a sacrifice in the struggle to defeat Satan. Yet if it was, surely something profound was lost.

As “The Red Tent” depicts it, the world of women in Jacob’s family was fragile, and male passions can and did destroy it. Yet, without the happiness of women, the man’s world fell into unhappiness as well. The story expresses the longing for understanding between men and women, that women’s religion and men’s religion could have coexisted and created a balance. But in the patriarchal society of the time that could never be. Thus women’s stories, and women’s faith, were nearly lost, and only the patriarchal viewpoint survived to become the normative root of the Judeo-Christian tradition.

Dr. Andrew Wilson is Professor of Scriptural Studies at UTS and Barrytown College. He edited World Scripture: A Comparative Anthology of Sacred Texts.

5 thoughts on ““The Red Tent”: What the Bible Might Have Been, Had Women Written It”