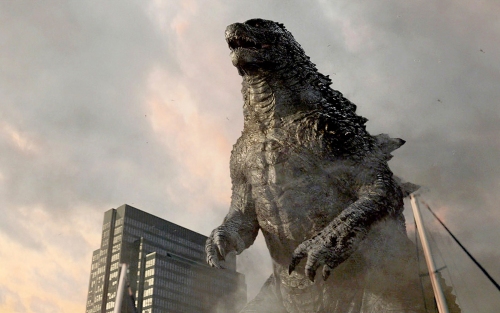 The newest Godzilla reboot starts with a nuclear bomb, a ridge of spines in the azure waters of the Bikini Atoll, and a clever retelling of some of the most painful parts of human history. Expectations are set high at the start of the movie with bits of nuclear testing footage interspersed with “secret documents” that turn into credits. An organization named Monarch, that was part of the movie’s viral marketing campaign, is revealed in snippets and glimpses. “Godzilla” gets the plot underway with a panoramic shot of a beautiful unnamed Pacific island, and an introduction to the bones of a giant prehistoric being.

It should be easy to figure out where the plot goes in “Godzilla;” it takes a backseat to the action and is rather simple with a heavy focus on wide shots of monsters, destroyed military bases, and burning cities. Humans unwittingly cause their own problems in the film by waking up monsters that should have been left alone. The militaries are very ineffective when dealing with the beasts and of course the brunt of the battle lies in Godzilla’s hands. It’s a common trope in Godzilla films that the monsters themselves represent nuclear power, but they are portrayed more as a force of nature rather than malicious beings, and there is an eco-friendly message that the monsters are merely seeking to restore balance. Perhaps the best feature of the giant monsters is that they absorb radiation, thus, a relic of the old Cold War fear of nuclear winters and radiation poisoning is dispelled by the very beings that come to destroy humanity.

Dr. Ishiro Serizawa (played by Ken Watanabe) basically reveals the message of the movie, that Godzilla himself is a balancing force, and humanity’s fate lies in his hands: An angry reptilian guardian angel who does not mind wrecking cars and knocking down buildings like bowling pins.

The emotional depth of Godzilla comes from following the journey of Ford Brody (Aaron Taylor Johnston), a reluctant participant in his father Joe’s (Bryan Cranston) journey to answer the mystery of their mother’s death. Joe is an engineer at a nuclear plant that suffers a reactor meltdown. Ford’s mother dies as a result. Ford is presented as a Marine at first, and then as a young family man. From the few sequences with his family, it’s easy to see that he is still deeply in love with his spouse, Elle (played by Elizabeth Olson), and their son.

The importance of family is highlighted throughout the film. a particular instance is a very heartwarming sequence where Elle tells Ford to fly to Japan shortly after he arrives home from a tour of duty; asking to bail out his paranoid father is an example of the filial piety that Elle possesses but Ford lacks. Most interactions between Ford and Joe reveal a prodigal father who abandoned his son when his mother died, a sacrifice Ford could not accept.  Joe eventually finds peace with his father after Joe is vindicated and then chases giant monsters for the rest of the movie. Predictably, Ford assumes his father’s mantle and his persistence to protect humanity and his family makes his journey the viewer’s as well.

The pace of the movie is slow at times. A lot of groundwork is laid to explain the origin of Godzilla and the other beasts that show up in the movie. A few minutes into the film it is already clear that there is a disaster brewing and it does not take long to show up. Most of the early action conceals the identity of the other monsters, mainly to build suspense. When they are introduced, all hell breaks loose and immediately sets the tone of desperation for the rest of the film. A giant chase involving the United States military fails to produce results and at times backfires. It is hard to decide if the arrogance of human beings or their incompetence is a theme.

There are also a few threads that are dropped here and there and left up to the viewer’s imagination: for example, Dr. Serizawa is in possession of his father’s watch that was at Hiroshima. Serizawa makes a reference to it and given that earlier in the movie it was made clear that nuclear tests were being used to try to kill Godzilla, there’s an implication the atomic bombs dropped on Japan were intended to kill the giant monster.

For a film about Godzilla, relatively little time is spent focusing on the giant monster himself. Godzilla is more of a silent focused hunter than a rampaging beast; he is mission-oriented. He’s also surprisingly quiet for a 300 foot tall monster, managing to move around silently and appearing out of nowhere a few times in the film. While a bit disappointing, there is enough action to satisfy disaster fanatics when Godzilla actually makes his appearance. His roar and fire breathing are particularly satisfying, with the film’s CGI comparable to “Pacific Rim’s” monster animation. In Japan, Godzilla is referred to as a Kaiju, a strange beast, and it has not been long since “Pacific Rim” restarted the love for giant monster movies.

Traditionally, Godzilla was interchangeable with the atomic bomb. In the original 1954 movie, nuclear tests gave him birth and he behaved like a nuke, destroying indiscriminately. Over time, Godzilla changed from a beast that repeatedly destroyed Tokyo into a savior that would appear whenever an enemy monster threatened Japan. The change into a primordial force suits Godzilla well. He becomes an avatar of God or nature, because he is seemingly the only one of his kind and operates on a very specific agenda to bring balance. Godzilla creates peace through destruction and death, maintaining dominion over the earth and basically giving humans a chance to live — nuclear energy used to give life.

Godzilla shares the limelight with two other creatures that are somehow equally as sneaky as himself, able to tunnel out of mountains with no one noticing they are gone until the last moment. They are a family as well, who try to procreate and continue their lineage of giant monsters. For that reason, it is hard to hate the monsters as they have no evil intent, but it does not make them any more appealing. One scene conveying the animal nature of the giant beasts is when they are finally reunited, they nuzzle one another and the male feeds the female nuclear waste; they then wander off to destroy San Francisco and give birth to hundreds of offspring.  A family of city-wrecking monsters is still a family of city-wrecking monsters. It’s very hard to see a future in which humanity can thrive alongside them, and so they become the enemy out of sheer necessity.

Overall, this latest “Godzilla” remake is an average popcorn flick. The action is exciting but much too spread out. The plot is predictable at times, and the pacing is too slow. For such a big reboot, it’s a good film, above average at times, but not impressive. If it were not Godzilla, it would not have created such high expectations. After all, for 60 years, he’s been a beloved cultural icon and he really deserves more screen time.♦

Andrew Stewart is a student at Barrytown College of UTS and shows movies weekly for its film club. He spent most of his childhood in Russia, Venezuela and Ukraine, and currently lives in Canada.